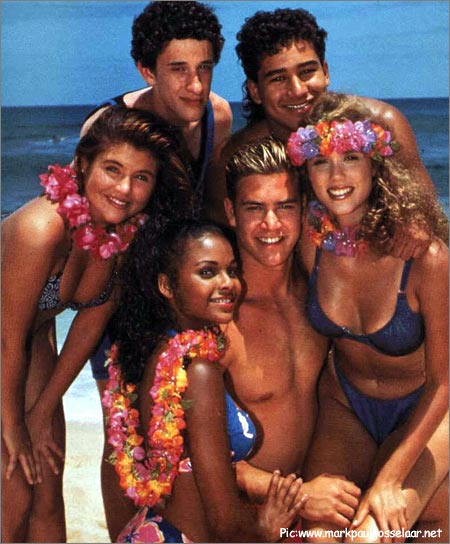 So, Jimmy Fallon on Late Night has been, since his inception, been trying to get the whole cast together for a “Saved by the Bell” cast reunion. Marc Paul-Gosselar in one of the most brilliant episodes ever, came out as none other than Zach Morris himself. We thought we were there. But in the news today it came out that Tiffany Thiessen would love to do the reunion but is too busy….Too busy….. Too busy….Too Fucken Busy?!?!  Busy doing what? Because as far as I know, she isn’t pulling in 100 mill a picture at the box office, and she isn’t winning an Emmy on her hit TV series… so what’s she holding out for? Does she want to be paid for the gig? Who knows? And hey, she was my love when I was 11-12 years old. I mean the way girls loved the 90210 guys, Tiffany “AMBER” was my girl. So I am disappointed majorly!!

So I was wondering to myself…In this NerdBastard’s opinion, what were the ten best SBTB episodes, and this is what I came up with. (No Miss Bliss Episodes. High School Only)

10) “Cut Day”-When Slater bets Zack a hundred bucks he can’t get out of every class on “Cut Day” and show up at every place they go. See, Zach would be suspended if he had one more unexcused absence so Belding was chasing him. It also happens to be that Jessie is protesting with some, one episode character, and falls for him because he believes that Styrofoam is bad also!! So Zach needs to make sure Slater doesn’t run into them….which leads to their amicable breakup.

9)  “Rockumentary”-Best for Zack and the gang for “The Zack Attack” in a episode long dream sequence narrated by Casey Kasem. With hits like “Did we Ever Have a Chance” and “Friends Forever” (Both on my Ipod) they were presented Grammy awards from Michael Jackson and Madonna (Terrible impersonators). Zack starts getting too big of an ego and the band breaks up. Lisa is an American Gladiator, Slater gets into a Nascar crash, Kelly plays a nun on Santa Barbara and Screech goes to the High Geek to find out the meaning of life (Marry a cheerleader and live at the beach). At the end they have a reunion tour and Zack wakes up.

8) “The Fight”-First Day of senior year Zack and Slater get into literally one of the most beautifully choreographed fistfights over a girl they both accidentally ask out. Out of every SBTB chick ever introduced this girl had the fattest ass! And these two best friends fought over that. At the end during the school dance the climax of the battle culminates when Mr. Belding’s new wig gets pulled off separating the two. And then they are friends again…….Wierd.

7) “Snow White and the Seven Dorks”-They decide to ALL join Drama Club and come up with Snow White and the 7 Dorks. Jessie wins the role of Snow White and Zach is the Prince…. So they have to KISS!!!!!!  Not only was the rapping phenomenal for a group of rich white kids but Kelly and Slater catch them making out during rehearsal and take it the wrong way…  But Lisa stole the play as the Mirror Mirror From the Mall.

6) “Jessie’s Song”-Jessie gets addicted to caffeine pills in 2 days time. Slater doesn’t believe Zack who gets very worried, but at the same time he has just discovered “Hot Sundae” the hot girl group of Lisa, Kelly, and Jessie…So….Conundrum. When he gets a talent scout out to watch them they have to replace Jessie with Screech. Oh No!! What’s gonna happen?! Hilarity ensues, Jessie Recovers.

5) “The Bayside Triangle”-Lisa and Zach hook up in this episode…And only this episode….For some reason they NEVER mention it again even though they are falling for each other. But Screech doesn’t like this one bit, and calls Zack out in the hallway to fight. “I’m not gonna fight you Screech”. Zack gets his foot stomped and his shirt ripped, but Lisa breaks it up…Compelling and heart wrenching, award worth performances.

4) “Pipe Dreams”-An oil field is found under the football field and for some reason this affects the kids….like they’d have any fucken say and get anything out of it, and decide they love it “A hot tub in every class!” But 2 turtles a few salamanders and Zack’s duck Becky dies when there’s a minor spill. So during the oil company’s presentation Zack deters the whole school board with his argument about the death of his duck and they decide not to drill!

3) “Screech’s Spaghetti Sauce”-Screech’s Secret Sauce! Which attracts the attention of one time Bayside money whore Soliel Moon Frye, and giving Zack yet another get rich scheme, it turns out Screech was using “Betsy Crockers Spaghetti Sauce” and they get a cease and desist from the company. Sheesh!

2) “Fake I.D.s”-With fake ID’s Screech makes the boys all go to “The Attic”, a hip nightclub. That’s when Zack meets a hot college girl but unravels a scheme that Kelly’s new scumbag Boyfriend Jeff was two timing her!! The Slimeball!! So Kelly shows up and sees for herself and all is well. That is until Zack’s mom shows and pulls all of them out by their ears in front of the older hot girls……Oh Brother.

1)  “School Song”-The competition for the brand new school song- Zach sabotages all the other guy’s instruments and rocks out with “Bayside is a school that’s cool and you know that it’s true!” When it comes down to Zach and Screech, the others get Zach back by ruining his performance when they make him drink “Pure lemon extract”, which makes Zach sing like a deaf kid would. They all get together and bring and bring down the house with their perfectly that Zach and Screech had to learn in 17 seconds (and they did). The beauty in making this number one was just the surreal, impeccable song that still lingers on the edges of my dreams. It is not the definition…It is the essence, the physical love and beauty in a pure substantial form you can wisp through your fingers like smoke. The prime example perfection, as if Davinci himself came back to life, wrote and directed this episode

Zack Morris recently appeared (Not Mar-Paul Gosselar) on Jimmy Fallon Live and is IN for the reunion!!