Easter will be here in less than a week, which means that Walgreen’s has been forcing rabbits on you since December. If you’re tired of stale chocolate bunnies and pastel-colored junk but still want to get into the spirit (Wait, just how do you get into the spirit for Easter? No, seriously. The books say that a guy died and then came back to life. How does this turn into “Happy Easter?”), look no further. The five sly animated rabbits below will save you from pink Peep hell (and if you’re reeeeeally nice, I’ll give you a bonus character).

When you’re asked to think of a “cartoon rabbit with more brains than my little brother,” you’ll naturally think of Bugs Bunny first. Appearing as a minor “Looney Tunes” character first in the 1930s and then as a fully-developed toon after 1940, Bugs has won the upper hand from just about everyone he’s gone up against. He married Elmer Fudd, hit Yosemite Sam with cannonballs and shot Daffy Duck full of “blanks.” In a few memorable episodes, Bugs outsmarted Gossamer, the big red monster (above) owned by a mad scientist, by playacting scenes from a beauty parlor. How very innnnnnnnnteresting. 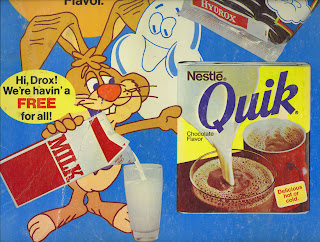 If you were raised in the 1970s or 1980s, there’s a good chance that your family’s chocolate powder of choice was Nestle Quik. That also would mean that you remember the Quik Bunny, also called Quicky. This bunny graced everything from tins of the chocolate drink to coupons for milk and cookies (see above) to Nesquik cereal, and my siblings and I had to have it ALL (Yes, even the gross strawberry milk syrup). Some kids got Quik Bunny confused with the Trix Rabbit, but Quik Bunny was so much better — he always got his object of desire. Moreover, the bunny loved Space Invaders! When I was little, I lovedlovedloved Disney’s Robin Hood movie. The singing animals, the scary jail, the cross-dressing to get the gold — Robin Hood had it all. And though Robin or Maid Marian often are cited as favorite characters from the movie, I felt more of a connection with Skippy, the little bunny Robin took an uncle-like liking to (but not in a creepy way!). Robin gave Skippy his bow, arrow and hat for Skippy’s birthday, and the little rabbit used a lost arrow as a way to bully his friend and get onto the castle grounds. Sneaky bastard.

I’m going to come right out and say it: Rabbit from the “Winnie the Pooh” stories was a dick. No, seriously. He was always bitching about something, spreading negativity like it was a weed. Sure, he ultimately cared about his friends, and sure, Pooh was dumber than Gomer Pyle, but Rabbit didn’t really need to be such a douche. He was smart, though. He always had a plan to maximize the number of carrots in his garden or to hide the honey from Pooh.

Besides Bugs Bunny, Roger Rabbit is one of the best-known long-eared rodents out there. His film, Who Framed Roger Rabbit?, was a 1988 hit that mixed animation and live action and heralded the re-emergence of traditional animation at the movies. The lovesick rabbit wasn’t always brilliant, but if he could make Jessica fall in love with him, how could we viewers not appreciate him? Moreover, he was featured in the movie’s corresponding video game (I know many people hated it, but I played the hell out of that on NES!) AND had a ridiculous dance named after him!

And I told you there was a Roger Rabbit dance. This was all the rage in middle school (No, I will not post pictures or videos of that awful time. Let’s just forget about that and move on, shall we?).

Who is Jack, you ask? I’m tossing another Warner Bros. character at you, AND I’m cheating because this guy is actually a mouse (But he has big ears and is part of the “Looney Tunes” family, so he’s sort of close to a rabbit, right? Shut up!). Think wayyyyy back, youngsters. Do you (or your parents) remember an entertainer named Jack Benny? He was known for his comic timing and atrocious violin playing. The WB honchos loved him so much that they turned him and his group of regulars into mice for the 1959 short “The Mouse that Jack Built.” They all voiced their own characters and played the parts just like they would normally. It’s still one of my favorite cartoons today.