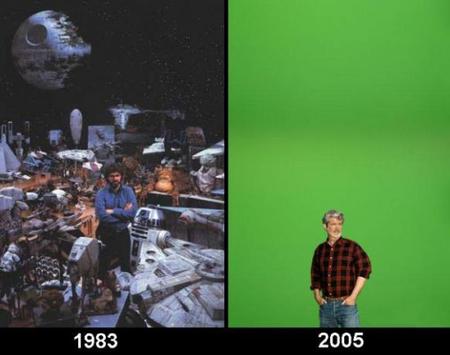 Mell Smith, in an interview with Daily Mail UK commented that George Lucas is buying up the likenesses of numerous dead movie stars.  “He’s been buying up the film rights to dead movie stars in hope of using computer trickery to put them together in a movie, so you’d have Orsen Wells and Barbara Stanwyck appear alongside today’s stars.”

Yep, that’s Mell Smith as the “Albino” in The Princess Bride.  You can check out his movie acting and directing credentials on IMDB.

Even taking these comments with a grain of salt it makes one wonder . . . How would that call to the relatives of the dead actors go?

“Hi, this is George Lucas.”

(Insert pause here while George patiently waits for the other person to be suitably impressed.)

“George Lucas, I made Star Wars.”

“Are you sure?  I thought that was William Shatner.”

“No, it was me.  I am calling about the film rights to your grandfather John Wayne.”

“Grandpa?  He’s dead, he can’t make movies anymore.  Maybe you should call Shatner, he’s back on TV now so he must still be working.”

“Well ma’am, I can use CGI to bring your grandfather back to the silver screen and act again.”

“Wait, your not that same guy that wanted him to dance in a vacuum cleaner ad are you?  My dad thought that was a goofy idea.”

“No, no, I want to make movies with his likeness.”

“Just a minute, let me ask my son something.”

(Heard in the background, “John Jr, you know anything about some guy named George Lucas?  He wants to buy you great granddad’s likeness to make movies.  Lucas the Star Wars guy?  What’s he gonna do?  Turn a legend like John Wayne into so kinda Jar Jar Binks nightmare?)

OK, we all know that George wouldn’t even get near the phone until a legion of flunkies and assistants had tried to close the deal.  One can dream though, one can dream.