I’ll be honest, I hadn’t much faith in this movie when it was first announced; the trailers didn’t particularly excite me either. Prior to viewing, I was decidedly against favoring this reboot because I hold such a high regard to the original 1982 Arnold Schwarzenegger version. Arnie’s Conan offered more than gratuitous nudity, tons of violence and oiled musclemen, it was a philosophical epic. It’s a film of great resonance and subtlety. This NEW Conan, directed by Marcus Nispel, does not even come close to matching the grandeur and significance of the original, but I don’t think it was ever meant to. What we have here is an alternative Conan. One that stands on it’s own context and one that is arguably truer to the original Robert E. Howard novels. Much to my surprise, it’s a pulpy piece of action/adventure goodness.

The story is this; as Morgan Freeman tells us: Conan is a young Cimmerian man cast adrift in the world by the brutal murder of his father and the destruction of his village. Driven by the need to avenge himself upon the evil Khalar Zym, Conan learns to steal, seduce, and fight his way to his goals. He soon discovers, however, that there are greater things at stake than his own personal quest: an unearthly malevolence stalks the world, and it may be up to Conan himself to save Hyboria from ruin.

I’ve had a man crush on Jason Momoa since I first saw him as the horse ridin’ Khal Drogo in HBO’s Game of Thrones. Admittedly, my penis instantly inverts into a mangina when I see this man, who IMO is the embodiment of bad-assery. That latter assertion is certainly evident here. He’s lean, mean and he’s no Arnold Schwarzenegger, but Momoa IS Conan the Barbarian. Rough, tough, gruff (goddamn I love rhyming) calculating and cool. Momoa embodies the barbarian and swashbuckling aspects of the character. A worthy successor to the Cimmerian’s throne.

Momoa’s reinvented take on the character isn’t the only element of the film worth praising. It’s the ludicrous brutality that will erect your man, or womany nips with excitement. High impact violence at it’s finest. The action really is great though, it was well shot and had nice choreography. One of my favorite scenes was watching Li’l Conan go from goofus to kick ass during a test of skill amongst the young warriors. Check it out for yourself below, but warning for the easily squimish, there will be blood. And possible, multiple decapitations.

Stephen Lang (Avatar) is effortlessly great as the villain, Khalar Zym and Conan’s father played by Ron Pearlman is..well Ron Pearlman. This man can do no wrong.

Nispel’s Conan reboot also works in some obvious nods to the character’s literary adventures. Along with several characters elected  from Howard’s novels, there are also a fair share of monsters appearing in the film that have some history with the Cimmerian — specifically the tentacled Dweller in the Deep, which can be seen in some of the early trailers for the film.

I’d like to also mention how much I liked art direction- beautiful sceneries with bits of fantasy and dark tones. It looked like something out of a Frank Frazetta’s painting.

Only 3 things really bothered me.

-Lack of ideological resonance. Nothing real is ever at stake and the movie has nothing to say about anything. In between the satisfying blood gushing and sword swinging you’re felt longing for the sophistication of the original 1982 film.

-The romance. Argh, I hate smooshy smooshy!  The romantic element of Conan’s relationship with Tamara, the female lead played by Rachel Nichols is totally lame. Not only that, but the recurring switch between“angry Conan” and “Conan in love” makes the character seem a bit unbalanced. 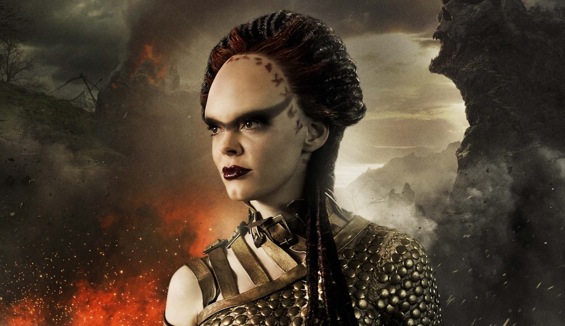 -Rose Mcgowan just bugged the hell out of me. She played witch Marique, daughter of Khalar, Conan’s main enemy. I’d say her performance and silly wardrobe was inspired by a semen covered fruit roll up, but that would be an insult to man wadded tutti fruttis everywhere. Suffice to say, your eyes will roll every time shes on screen.

All in all this is a fantastic, fun movie. Blood, fast-paced action, swords , muscles, exposed titties- it’s all there. It doesn’t pretend to be anything else than what it is. Just as thrilling and fun as it is gory and violent.