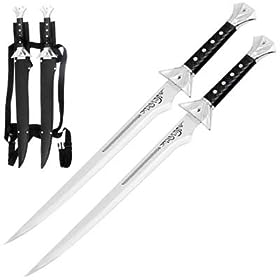 Drizzt Do’Urden, the dark elf hero of the Dungeons and Dragons book series Forgotten Realms, Icingdeath and Twinkle Sword Set. Arguably one of the most popular series and book heroes since LOTR or Magician’s Apprentice. You can buy them on Amazon.com among other sites. There may be two different sets of brands, but they are so strikingly similar I believe you would want the OFFICIAL ones which Amazon is known for carrying.