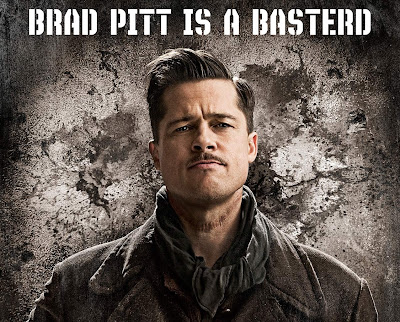 Everyone has heard probably that this year, the Oscars have jumped to 10 Noms to wittle down, and in talks for one of the slots is yours and my summer fave, Inglourious Basterds. Squeal lil piggies, squeal.

So, Quentin Tarantino finally has something he can franchise. Inglourious Basterds. I realize that although it was a Nazi/WW2/Fictional tale, it has as much potential for prequels and sequels as much as Kill Bill had available to it. You see, Kill Bill was supposed to be one movie, but as most of you know, the studio axed that. Quite literally in fact, they sliced it like a Hatori Hanzo sword right into two films, which ultimately worked to it’s benefit. The Bride could return for some side story line like the distraught daughter of Vernita Green, coming back for revenge.  Now with all the big bank and great reviews of IB’s, as well as the talk of a Best Picture Nod, and supporting actor, from the Academy Awards…We know QT has been approached for MORE MORE MORE Inglourious Basterds.

Like I said in my review, all the characters in Kill Bill, Pulp Fiction and Reservoir Dogs had compelling and fleshed out characters, while the Basterds lacked anything resembling a back story or personalities. Well beside Bear Jew, and Aldo Raine (Brad Pitt), there is much room for this character to fictitiously alter history in several other ways. Hell, they could even have a trilogy of WW2 prequels leading up to the first IB’s. Or Aldo being an OSS operative in the 1950’s during the beginning of the Russian Cold War or even sending the Basterds to Korea, to do what they do best. Killin’ Nat-zee’s.

Originally, Tarantino had planned a film for the two, both dead, Vega brothers, also a prequel. However it has been getting close to 15 years for Reservoir Dogs, and a little over 10 for Pulp Fiction. With the movie being a prequel, I think the Tag Team of Michael Madsen and John Travolta, having aged a bit since both their Vega characters were greased in prior films, is probably not really gonna work any longer, and is being scrapped. Unfortunately of course, I think that would have been an amazing movie, with both of these career criminals having insanely calm, cool, and absolutely psychotic personalities…Well, it’s our loss Tarantino sat on his laurels for too long, thus, fucking the fans out of yet another masterwork….Ahhhh, at least we have some Inglourios redemption!

So why not? Why not take it while its hot and exploit it for our geek benefit. The same way we’d flip for anything Star Wars, Lord of the Rings, or Harry Potter, even if they’re shit, they will be drovers.

Hey, Brad Pitt took part in the raping of the Ocean’s franchise, why not rape the Inglourious Basterds…It will work..It WILL.