Samuel L. Jackson reading “Go the Fuck to Sleep.” I really don’t need to tell you anything else. It’s precious, charming and fucking hilarious. (CollegeHumor)

Pants. Wonder Pants! Every chick will be wearing pants! Oh, the silly promises those comic book companies make us. Because everyone looks more sensible with pants, lots of pants. Check out some seriously outrageous costume redesigns at College Humor. Be careful not to share these with any DC execs, they might get ideas.

Coming to an SNES near you, Game of Thrones! See all the bloody, incestuous fun in amazing 8-bit animation! Or, just listen to this sweet version of the GoT‘s theme as a rockin’ 8-bit tune. Hyrule’s got nothing on Westeros. (Buzzfeed)

Wow. How is it fan-made posters manage to be more incredible than official ones? Studios should really be outsourcing this job to the fine folks on the web. For more of Jane Meadows awesome artwork click here. (@janemeadows)

Neon signs are a rarity these days, which is a real shame for many reasons but most of of all because of these incredible neon designs! Check out more Star Wars, Pulp Fiction and Ghostbusters signs at Nerd Approved.

It’s an oldie but a goodie. David Tennant guest stars on The Catherine Tate Show for this Comic Relief sketch. But is Catherine “bovvered?” (TheMarySue)

Completely burnt out on 3D movies? Yeah, me too. We can only hope the above pattern repeats itself and we move away from this gimmick sooner than later. Click to enlarge the above infographic featuring every 3D movie ever made. (NerdApproved)

I really don’t get the appeal of Angry Birds. Sorry. But being able to play it live with real world consequences? Sign me up! (GeeksAreSexy)

Darth Vader gets a helmet rubdown from a loyal trooper. (FashionablyGeek) Then he takes his AT-AT for a walk. The easy living of a Sith lord. (UnrealityMag)

John Cleese has been starring in a series of ads for TomTom GPS. Needless to say the’re pretty effin’ funny. In this one he learns to manage his road rage. (TheMarySue) A stylish, nerdy way to keep all your crap organized. Just think of the prizes you could hide away in those gold boxes. Warning, don’t try to break ’em with you head (YouBentMyWookie)

If you need more Mario in your life, head outside and continue decorating. (NerdApproved) 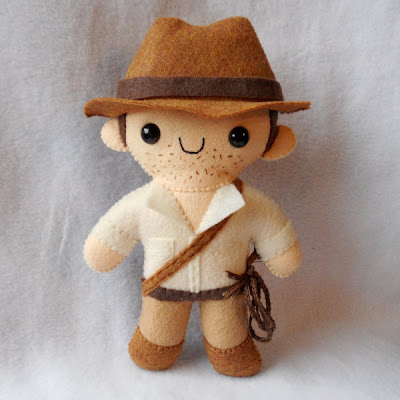 Plush Indiana Jones by miss coffee, who is accepting commissions as described here. Umm, could this be more adorable! Look! Plush stubble. (SuperPunch) Kermit has really become a cosplay fan. Check out what a great Mal Reynolds he makes. (Shirtoid!)

Or if comic books are more your thing he’s also been seen sporting this great Green Lantern costume. His even looks real! (BleedingCool)

You lose the cuteness when you take a Pokemon and make then realistic. Now they’re just creepy. If you saw one of these scampering around your house you’d be grabbing that Raid damn fast. (Geekosystem)

Only the japanese would look at a urinal and think, “How could we turn this into a video game?” (AnimeNewsNetwork)

A place to do your lovin’ Jurassic style. Umm, whatever that means. (i09)

Mmm… what could be tastier than this Doctor Who cake? (ThatsNerdDelicious)

Well, maybe this completely awesome Millenium Falcon wedding cake. Who could bring themselves to cut this up!? (Blastr)

Some incredibly smart and awesome and dare we say sexy? person has created the most epic of drink menus. It’s like interwebs got hammered and then threw up at your favorite bar. (TDW)

Need to know where you fit in with geek culture? Here ya go. (NerdApproved)

From the people who brought us the R2-D2 swimsuit is this delightful mash-up. Ariel never knew what was coming. (FashionablyGeek)

Oh yeah, Toy Story just got a hell load more grown up. This is what happens when you abandon your toys to their own brutal devices. (Toy Story Unleashed)

I know who I’m picking to win the championship next year. Suck it, Lebron, winter is coming. (FashionablyGeek)

Oracle will be no more come September but what will happen to her sweet pad? Good news is you can rent the clocktower. (ComicsAlliance)

And finally, the only time you ever need to know. (FashionablyGeek)