When discussing Star Wars, it’s easy to forget that some people have only seen the original film trilogy and perhaps the prequels. Thus, when you get on a tangent and start spouting off to your friends about Han’s abandonment of his son and his shunning of Leia after the Yuuzhan Vong’s actions resulted in Chewbacca’s death, people will look at you funny.

There’s a whole world of Star Wars beyond the films. Bits are found in tv shows, video games and toys, but most of the expanded universe (E.U. for short) comes from literature like novels and comics. Below, read about ten characters from the EU your friends will need to know if they want to keep up with the universe’s best space drama. Just tell them it’s a primer for uber-fandom. 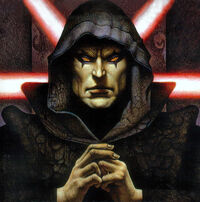 This guy is the oldest character you’ll read about today. Darth Bane, formerly known as Des, lives wayyyyy back in the Old Republic era as a miner with an abusive father. To get away from Dad and the people mad at him for biting someone’s thumb off and getting into a knife fight, he joins the Brotherhood of Darkness — a mobile moose lodge for dark Force users of varying abilities. Bane begins ascending the ranks and figures out that the Brotherhood’s weird equality stuff — many, many potent Force users are given the title “Dark Lord of the Sith” — doesn’t fit the times anymore, especially since the Sith fight among themselves anyway. He goes on a spacewide walkabout, finds some old, important Sith teachings, destroys the Brotherhood of Darkness and declares that there can only be two Sith at a given time — a master and an apprentice. This “rule of two,” which stays in effect until the Palpatine/Vader team and then the Caedus/Tahiri team, means that it’s appropriate for the master to lead until the apprentice wants that position badly enough to kill the master for it. This comes into play as Bane takes on a child apprentice who, many years later, turns around and shuts him down.

Mara may easily be the most recognized character from the EU, as she’s been part of most of the Star Wars novels since her debut in 1991’s Heir to the Empire, which reintroduced Star Wars in literature. Mara went from being Emporor Palpatine’s “hand” to a powerful Jedi ally to Luke Skywalker’s wife to Ben Skywalker’s mother. She’s known for her testiness, her Dark Side observations, her combat abilities and her flaming red hair. A Jedi master, Mara uses her cunning to out-think nearly all of her opponents, though Jacen Solo barely defeated her after he became a Sith recently. Sadly, that meant the end of Mara, except for memories and Force ghosts. Learn more. 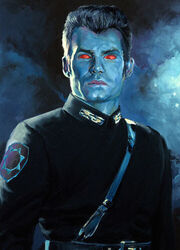 Like Mara Jade, Mitth’raw’nuruodo (commonly known as Thrawn) became well known and popular thanks to Timothy Zahn’s novels. He’s the only non-human male to become a Grand Admiral for the Empire, which is crazy, since the Empire hates aliens, particiularly blue-skinned Chiss. He sees military strategy like a game, and he’s brilliant at it, having conquered the “good guys” and depleted their forces more than once. After the Emperor’s death, he unites the remainders of the Empire against the New Republic and sparks interest in Palpatine’s cloning experiments. In fact, after he dies, Luke and Mara find a clone of Thrawn hidden away, just waiting to reclaim his post once more. Learn more. 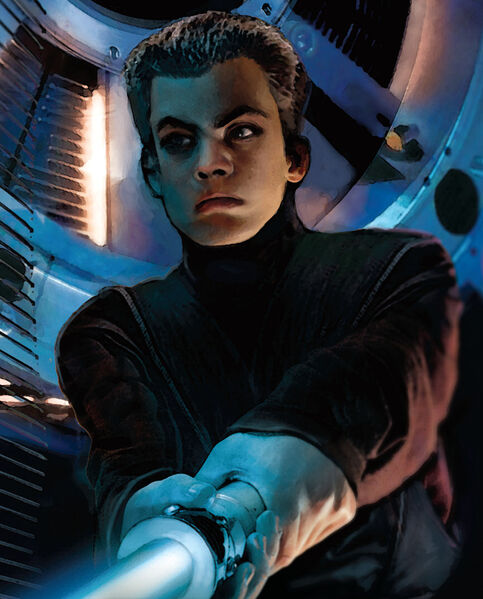 Remember that part in the old Jedi code about how Jedi aren’t supposed to have families because those attachments will become their (and the galaxy’s) downfall? Yeah, Luke and Mara don’t heed that. Long after they marry, Mara becomes pregnant with Ben during the Yuuzahn Vong war. There’s some doubt and freak-outs about the Vong infecting the embryo, but Ben turns out just fine. Well, “fine” if you exclude that he shuns the Force as a youngling and eventually apprentices himself to his Sith cousin. Good thing he realizes that he was dumb on both counts. Learn more.

Anakin? Who names a kid “Anakin?” Especially after the kid’s grandfather was instrumental in obliterating most of the Jedi, making the universe a sucky place to live, and forcing people to pee their pants at the mere mention of that name? Apparently Leia and Han do. Anakin is the third and youngest child for the famous couple, and his name is the result of Leia finally coming to terms with her father’s life and his eventual redemption. Anakin has a head for machines and puzzles, and he’s quite strong willed. He apprentices with Luke and is the one who figures out why the Vong can’t be sensed through the Force. He is responsible for the Jedi mind meld and battle meditation for one particular strike team, and he dies in battle becoming one with the Force while helping his fellow Jedi. Learn more. 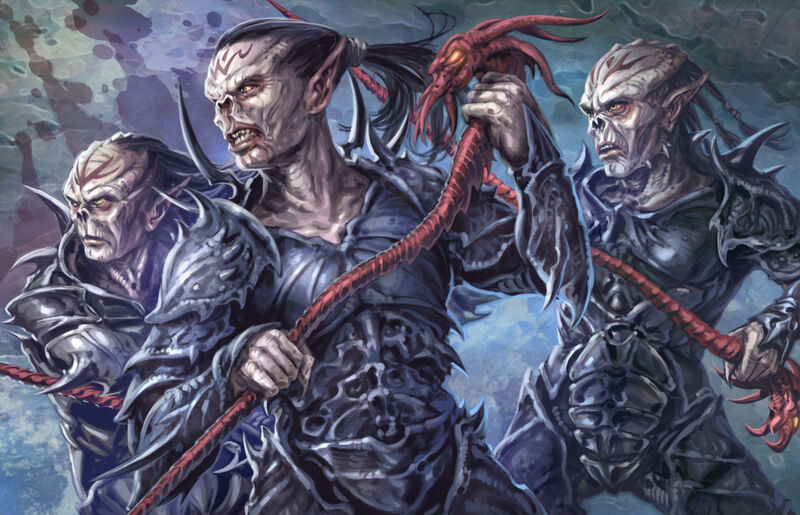 Since we’ve mentioned the Yuuzhan Vong frequently today and will continue to do so, it’s probably important that you know who these aliens are. The war with the Yuuzhan Vong starts in Vector Prime and kicks off the uber-long “”New Jedi Order” series of novels (though they were cryptically mentioned not by name in other novels and then added into prequel lore through certain other novels). The Yuuzhan Vong is a race of human-like, lumpy, super-strong aliens who embrace pain, disfigurement and brutality in the name of their gods, and they appear to live outside of the Force. They invade and conquer much of our heroes’ galaxy (trillions of people die!) and use slaves (Yuuzhan Vong of a lower class) to begin terraforming the fallen planets. The Yuuzhan Vong hate machines and human technology; they have weapons and ships by way of natural tech — plants, animals and biomatter. The war with them is long and difficult until Jacen Solo figures out how to turn their bio tech against them and temporarily return peace to the galaxy. The Yuuzhan Vong who remain are generally helpful or tolerant of humans. Learn more. 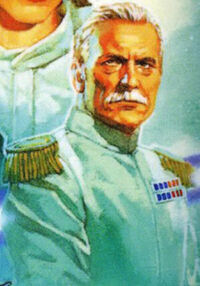 An old naval officer, Gillad Pellaeon is a man of honor and dedication to his galaxy and his commanders. Though he long played for the Empire team, that changes after Palpatine and then Thrawn die many years later; he eventually brings the remaining Empire leaders together and signs a peace treaty with the New Republic. Pellaeon gains a greater understanding for ship tactics through Thrawn, which comes in handy when he and the Empire remnants are asked to help with first the Yuuzhan Vong war and then the Swarm War. His luck runs out, though, when he goes against Jacen Solo, who has started wearing his Sith panties. Solo sends crazy Tahiri to convince Pellaeon to do his bidding, and when the officer refuses, she blasts him to bits. Learn more.

These two characters are intertwined so much that it would be difficult to discuss them in separate entries. Jacen Solo is the son of Han and Leia Solo, twin to Jaina Solo and older brother to Anakin Solo. Tenel Ka is born into royal Hapan blood. She joins the Jedi Academy and makes fast friends with Jacen, Jaina and a few others. This is the start of Jacen and Tenel Ka’s friendship and eventual love. Despite losing an arm to Jacen during a lightsaber training exercise, Tenel Ka continues to appreciate him and fight by his side. Both have their quirks — Jacen is easy-going, connects with animals and empathy and loves pondering the mysteries and purpose of the Force, while Tenel Ka doesn’t joke around, is proud of her skills and fitness, and follows the basic understand of the Force to a fault. Despite their differences, friendship begins blossoming  ino love during the long Yuuzhan Vong war and afterward.

And “afterward” is where things get tricky. During the Swarm War with the Killiks (Alien bugs. Seriously.), Jacen and the now-queen-of-Hapes Tenel Ka get around to some unmarried baby-making funtime. Again, remember that old Jedi code of “no attachments?” Yeah, Jacen doesn’t care. They have their secret sexin’, and she gives birth to their daughter Allana. Allana’s father remains a mystery to everyone (which is super-hard to do around the Jedi and their Spidey sense) while Jacen puts various moves into play to make him the leader of the Gallactic Alliance. He slips further and further down the Dark Side path and claims to himself that his new Sith-ness is all to protect Tenel Ka and Allana (Where have we heard that one before?). Eventually, he goes bat-shit crazy with power and rage, and she denounces their relationship and hides Allana from him. By this time, Jacen is calling himself Darth Caedus and killing people with Force chokes left and right. Tenel Ka allies with the Jedi, Han and Leia, while Jacen goes on to battle his own twin, Jaina, and loses. For realz. Learn more. 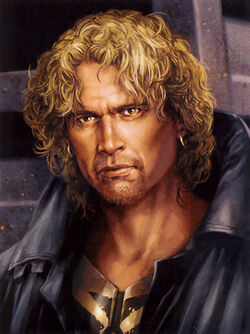 After the depressing story of Jacen and Tenel Ka, surely it’s time for something to go right for someone, right? Nope. Cade Skywalker is Luke’s great-great-great-great-grandsomething from the Star Wars: Legacy comics that are set wayyyyyyy after the original trilogy. Cade is abandoned by his mom and saw his Jedi daddy die; naturally, he then denounces the Jedi way of life and his potentially-dark Force powers, becomes addicted to the hallucinations caused by death sticks and becomes part of a bounty hunting trio. He’s lured into a pissing match among galactic leaders and Sith who want his Force talents and eventually decides that he’s the Chosen One to destroy the new batch of Sith.

All of this crazy Star Wars drama is even better than when Marlena turned into Satan on Days of Our Lives back in the day, honestly. What are your favorite Star Wars expanded universe characters and novels?