Superhero Round Up- ‘Wonder Woman’ On Netflix, ‘Powers’ Has Its Retro Girl, Michael Clarke Duncan Talks ‘Daredevil’, The Joker Will Always Be Mark Hamill and Blake Lively Might Be Star Sapphire in a Future ‘Green Lantern’ Movie.

Super Hero Round Up? All the little Superhero movie and news bits that you should know about, but just don’t make a full post on their own. So tighten up your belt, rub some dirt on your hands, and get ready for some fast and furious Superhero news!

Wonder Woman is making a comeback on Netflix:

The failed pilot from David E. Kelly, starring Adrianne Palicki, was never finished (thank gawd!) and axed before NBC could further embarrass themselves. However, word around the nerd water cooler is that it may become available on Netfllix.

User robolivera, from the DC Universe/Warner Brothers’ fan forum, posted about how he discovered this potential news:

I was looking for Captain America on Netflix to see what it said about a release date even though it’s not even out in the theaters yet. It has a picture of him with “NR” (Not Released) next to it…Then I searched for Lynda’s WW… It says NR too. BUT it has Adrianne Palicki’s Wonder Woman on there as well with NR next to it!!

He isn’t the only one though, as GloriaofGrayskull from the mattycollector forum also spotted this:

Today I searched for wonder woman on netflix site and it seems like they are going to release the new pilot in dvd I added it to my queve/list of dvds everyone add it so that there is high demand for it!

I think we all want to see the pilot episode, much like how we all just have to stop and look when we pass by a car crash. Morbid curiosity. Do these reports mean we’ll actually get to see it? Don’t get your hopes up. Netflix is notorious for listing shows and movies in advance in order to gauge interest. This is probably just one of those cases. This of course doesn’t mean that the show won’t ever be released as is, or get picked up by another network, or see an eventual release on Netflix. The point is, don’t expect the new “Wonder Woman” pilot/series to be actually available anytime soon.

Eleven-year-old Baliee Madison has been cast in the role of Calista in the upcoming “Powers”  FX channel TV adaptation from Brian Michael Bendis. With the series getting closer to filming its pilot episode they need to keep filling places and Baliee seems to fit the role perfectly.

For those unfamiliar with Bendis’ series, Calista is the reincarnation of a hero known as Retro Girl, who goes to live with the lead character Walker after her father goes on the run when he is accused of murdering his wife. Calista learns to control her powers during the series thanks to help from Walker, who once had powers of his own.

Michael Clarke Duncan on the Daredevil Reboot & Wanting to Play Panthro in a Thundercats Movie: 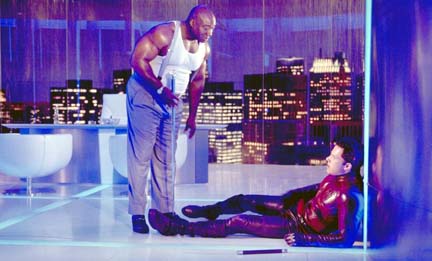 The current voice of Kilowog in Green Lantern, Michael Clarke Duncan, is one tough looking gentleman, but he’s also very polite. In an interview with Blackfilm, Duncan spoke in detail about voicing the intergalactic space pig, and also responded to a question about Fox’s upcoming reboot of Daredevil. The film is in it’s early stages of development, but it’s rumored that Kingpin is making a comeback, to which Duncan responded:
“Oh, yeah. I loved playing Kingpin. Kingpin was a cool guy. He ran everything. Not withstanding the last fight at the end of the movie with Daredevil, Kingpin was the shit, man. I’d be honored to play Kingpin. I’m only 280 (pounds) now. So, I’d have to gain a considerable amount of weight because I think I was weighing 340 when I did Kingpin. I was well over three hundred. I’m an actor and if that opportunity came up I’d love to do that character all over again.”

He’s also a big Thundercats fan, and he’s highly interested in playing the nunchuck wielding Panthro if a film were ever to develop:

“I’d love to play Panthro from ‘Thundercats’. I remember character and the series from years ago. I used to watch that when it was on television a lot and Panther was baldheaded and looked like he was African American to me. He was very defined, quick, had the nunchucks. I don’t know what I’d do with the nunchucks. I hit myself in the head when I was younger, and so they’d have to teach me that move. Panthro would be a really good opportunity for me. I think that they have another ‘GI Joe’ movie coming out. I would love to try and get involved in that. There are a lot of different things coming up that I would love to be involved in. If they are open, I’m ready.

Via: Comic Book Movie
Mark Hamill Will Continue to be the Voice of the Joker

This just tickles me crazy to hear: Mark Hamill is going to continue to be the voice of Gotham city’s craziest rogue villian. Last year Hamill mentioned that he was going to retire from being the voice of the “Clown Prince of Crime,” which broke quite a few hearts. As of right now, though, via Mark’s own Twitter page:

“I only said Arkham Asylum would be hard to top, not that I was quitting.”

Love interest to Hal Jordan and future Star Sapphire Blake Lively might be getting way more exposure after the debut of Green Lantern in theaters. Warner Brothers is already planning for the future, and if all goes well it’ll mean more than having a simple lovers’ spat.

[Spoilers for Green Lantern movie and the sequel ahead]

Ryan Reynolds got the entire CGI suit treatment for his costume as Hal Jordan. Just think of what they’re going to do for love interest Carol Ferris. That right, if everything goes well for this weekend and the WB gets good enough feedback, it’s a fair guess that a Sapphire film is in the future. In a recent interview Lively said: “If this movie is successful and we did a few more films, I’m pretty confident that Star Sapphire would show up.”

Ryan had to wear a skin tight suit day in and day out for filming whenever he was Green Lantern. Just think of what Blake will have to go through. If you need an idea just use those “alleged” pictures she “allegedly” took and photoshop the hell outta them.