On May 10th, viewers got their first taste of the Shane Black directed, The Predator in a teaser trailer.  It gave a brief glimpse of the “Super Predator” and the cast in action.

Now 20th Century FOX has released a new poster and a full trailer for the film that offers a better idea of the story and how things will go down.

END_OF_DOCUMENT_TOKEN_TO_BE_REPLACED

Last week, Dark Horse Comics finally released a huge selection of its back catalog on the Comixology app. This means several amazing series that weren’t previously available now are. To celebrate the new addition, Comixology is offering several of these series at discounted prices.

While Marvel and DC are often considered the top dogs in the comic world right now, Dark Horse has produced some of the greatest comics and characters in the medium for almost 30 years now. No small feat against those power houses. This sale is a perfect opportunity to explore and rediscover the company’s distinct quality and presence. But, bearing in mind how tempt—I mean crazy it would be to spend a month’s worth of paychecks on all of these fine books, I’ve narrowed it down to the best of the best. To keep the list somewhat objective and brief, I opted for title that had the best deals price-wise and will read well on the Comixology app.

So which Dark Horse title will you bet on?  END_OF_DOCUMENT_TOKEN_TO_BE_REPLACED

There are a lot of movies out there.  There are a lot of comic books out there too.  Both have been made for over 80 years now, so it’s no surprise when a popular comic book is adapted into feature-film form (and on occasion, vice versa).  We’re currently living through what is easily the high point of cinematic comic adaptations (in terms of sheer volume, at least), and superheroes are all over the big screen – but comic books contain so much more than spandex-clad do-gooders!  In fact, there’s been there’s been a crap-ton (very scientific term there) of movies to hit the theaters that you probably never even realized were based on comics.

This list is by no means all-inclusive, but I’ve rounded up 15 of the biggest and most intriguing movies that you might not have known started out in art-book form.  Let’s take a look, shall we – and no, this isn’t one of those annoying sites where you have to click NEXT after every entry to visit a new page to help us build our site-view count!  You’re welcome! END_OF_DOCUMENT_TOKEN_TO_BE_REPLACED

Joss Looks Back on his One Mistake: ‘Alien: Resurrection’

Want proof that Joss Whedon is merely a nerd demi-god, and not a full-on nerd god? He can still make mistakes. To wit, you may recall a film called Alien: Resurrection, the fourth film in the storied Alien franchise that was written by no less than Joss Whedon! You read that right. Joss. Whedon.

So you probably already know that, but the subject of Alien: Resurrection came up again in a recent interview that Whedon did with the magazine Total Film. They asked The Avengers director about both the Alien film he authored and his views on the most recent installment of the franchise, Prometheus.

“Yes, I did see Pro-meaningless,” he joked. “In all seriousness, Alien: Resurrection was, I thought, the lowest I could ever feel. And then they cancelled Firefly. ‘Yup, there you go. That’s me feeling even lower.’ Let me quote King Lear – ‘The worst is not, so long as we can say, ‘This is the worst.'”

As for the exact hiccup in the execution of his Alien script, has an idea about that. “Casting is storytelling,” he explained. “I wrote two characters for Alien: Resurrection and their arc was that you would not know what way they were going to go. One of them turned out to be insane – and what do they do? They call Brad Dourif. So there is no plot twist. Brad is a very good actor but he has been pigeonholed into these roles. Then they cast J.E. Freeman as a thug – and his character was also supposed to be a mystery. So there you go again – the mystery is gone. Those are just a couple of examples because there are thousands of them when it comes to Alien: Resurrection.”

Well, perhaps Whedon can take some solace in now having directed the third most popular film of all time and basically having carte blanche for anything he wants to do in Hollywood. “Yeah – you don’t ever get over it,” he said matter of factly. “When you are making a movie you are making something that is going to last forever, especially now with the internet. So there is always going to be a shitty Alien movie out there. A shitty Alien movie with my name on it.”

But at least it’s not the shittiest Alien movie of all, right? I mean, look at Alien Vs. Predator.

“I actually like the first Alien vs. Predator. I’m a Paul W. S. Anderson fan.”

Well, there’s no accounting for taste. 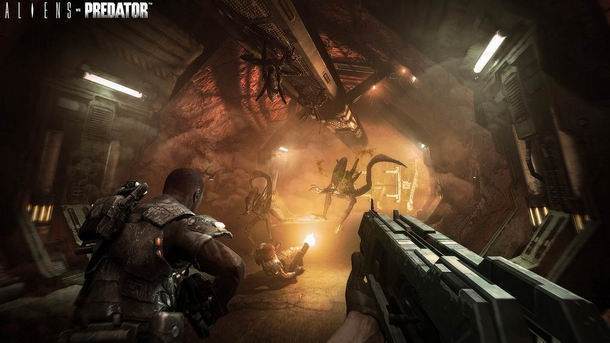 (Look at these tasty pics! The Alien VS Predator game isn’t far off and the news is good.)

They have tried and failed well…with EVERY endeavor, Alien VS Predator has been a struggling franchise since the beginning of its conception into the video game world. As the history of it goes (I was an AVP purist from Aliens and Predator 2) before they made any video games they had the series as a book set. The first in the set were AVP:Prey and Hunter’s Planet, both great books. The video games however all bit it HARD save one (The Alien VS Predator Arcade game which never translated over to systems), from the Super Nintendo version where you are a short and stubby midget- lookin’  Predator (I still own it). So I can only guess the reason people are getting pumped about this new version is Xbox360’s savor graphics and game play. The demo date has been released for your testing pleasure:(via Destructoid)

The info comes via an Xbox LIVE Spotlight ad which advertised the demo for a Thursday, February 4 release

There was an attempt similar to this in the mid 90’s for the Atari Jaguar, which was a mega Wolfenstein Ripoff (pictured). So hopefully the demo gives us a good idea of the greatness to come. So far all the screenshots have been clean and beautiful. I can’t wait for the download.