Check Out Episode 1 & 2 of SyFy’s Battlestar Galactica: Blood And Chrome

I need some help here, no matter how I look at it, I just can’t figure it out. Let me lay out my problem. SyFy airs a Battlestar Galacitca three hour miniseries, then airs four seasons of the critically praised and fan loved (Minus the series finale) reboot of  Battlestar Galactica, but after approving, completing, then waffling between airing the show or making a web-series of the prequel movie Battlestar Galactica: Blood and Chrome, the powers that be at SyFy finally decide to put the show on the web as a 10 episode web series and then air a two hour “movie” version in February 2013 with a DVD release soon after.

I guess the plan is to milk this thing as much as possible instead of just giving the show the respect it deserves, and the fans what they want, when they want it.Just forget about everything you just read and enjoy the two episodes that are available below. SyFy confuses and confounds the hell out of me and I just can’t figure it out. I’m obviously rambling so I’m gonna take a Xanax and lay down for a bit.

Ensign William Adama (Luke Pasqualino), barely in his 20′s and a recent Academy graduate, finds himself assigned to the newest battlestar in the colonial fleet: The Galactica. He quickly clashes with his co-pilot, Coker Fasjovik (Ben Cotton), a war-weary officer with just 47 days left on his tour of duty. In pursuit of the intense action that the Cylon war promises, Adama can’t wait to enter the fray.

Now this I didn’t expect. Last year at  Comic-Con, Syfy’s president of original programming, Mark Stern, hinted that the release of Battlestar Galactica: Blood & Chrome was sort of up in the air and might just end up as a webseries or worse, just being dropped. This past weekend at WonderCon they screened a trailer for it, and apparently composer Bear McCreary says he’s finished the score for the two hour pilot.

While there is still no official release date, they have to be close to announcing one soon. Unless of course they bump it for another Octomegashark movie or something.

Want to see some of the action, complete with lame technoy cover of Led Zeppelin’s “Immigrant Song”? Hit the jump!

END_OF_DOCUMENT_TOKEN_TO_BE_REPLACED

OK, the title “Battlestar Galactica: Blood and Chrome” sounds to me like a really bad pr0n title. Particularly the ‘Blood and Chrome’. Fetish machine pr0n and vaginal bleeding is a can of worms I’ve just unleashed upon your innocent nerd minds. Your welcome.

Pasqualino on left; Cotton on right

Here are the official character descriptions:

Pasqualino will star as the young, talented fighter pilot William Adama, a recent Academy graduate who finds himself assigned to the newest Battlestar in the Colonial fleet: the Galactica. Full of ambition and in pursuit of the intense action that the Cylon war promises, Adama quickly finds himself at odds with Coker (Cotton), the battle-weary officer to whom he reports. With 45 days left in his tour of duty, Coker desires an end to battle just as much as Adama craves the start of it. Though they clash at first, the two men forge an unlikely bond when a routine mission turns dangerous and becomes a pivotal one for the desperate fleet.

I have no opinion on the casting. I’m still hung up on the fact that they just canceled a “Battlestar” prequel and now there already moving onto another. “Caprica” was getting good. It ended all too fast. It wasn’t given the time it needed. If SyFy is going to be as impatient as it was with the high-quality Caprica, why even bother? Regardless, I’m sure BSG: Blood and Chrome will be equally brilliant and thought provoking.

Blood & Chrome is set during the 10th year of the first Cylon war. The show will debut with a two-hour pilot on Syfy, executive produced by David Eick. 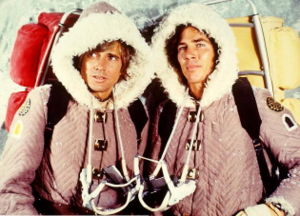 WAAAAHOOOO!  Love those Battlestar Galactica snow suits!  The original series episode, The Gun on Ice Planet Zero is one of my favorite original series episodes.  Just seeing that snow in the concept art above has me all a twitter or twatter depending on your naughty bits.  I must say that after Caprica (I kinda faded out on that one, really liked the start, but then my interest just kinda faded.)  I didn’t have much hope for any other Battlestar Galactica projects, I figured that BSG could use a rest for a bit.  Now, I am thinking maybe I could live with them cranking out BSG movies set on ice planets.

The two-hour spin off pilot, from executive producer David Eick, will follow a twenty something William Adama during the 10th year of the first Cylon War. He soon finds himself leading a top secret mission that could change the course of the war.

“While maintaining the themes of politics, social propaganda, and the timeless question: What does it mean to be human?, ‘Blood & Chrome’ will also return us to the authentic, relentless depiction of combat and the agony and ecstasy of human-Cylon war, which was the hallmark of ‘Battlestar Galactica’s’ early seasons,” Eick said in a statement.

“Blood & Chrome” is loaded with new characters, but I’d say the most compelling and unusual is the woman with whom Adama connects most deeply in the pilot — Beka Kelly, an enigmatic, seemingly impenetrable software genius who gives Adama a run for his money in more ways than one.  She’s definitely in the tradition of “BSG’s” and “Caprica’s” uniquely strong, remarkable female characters and will be a huge casting opportunity for someone out there, whom we look forward to discovering…”

Click through the jump to see more concept art and a picture of young Adama!