Just a quick update this morning for anyone anxious to see a live-action movie on the big screen based on the Cartoon Network series, Ben 10. The film is under development by uber-producer Joel Silver, the man behind The Matrix, Sherlock Holmes and Lethal Weapon films, and up until recently, Albert Torres (Henry Poole is Here) was toiling on the script. Now, it’s being reported by The Hollywood Reporter that Ryan Engle (New Line’s upcoming adaptation of the video game Rampage) will be reworking the screenplay.

Do you remember Ben 10? If not, here’s the premise courtesy of Wikipedia:

Ben 10 centers around Ben Tennyson, a ten-year-old boy on a cross-country summer vacation, with his cousin Gwen and their grandfather Max. On their first night camping in their grandfather’s RV affectionately named the “Rust Bucket,” Ben finds an alien pod with a mysterious watch-like device named the Omnitrix. The device then permanently attaches itself to his wrist giving him the ability to transform into a variety of alien life-forms each with its own unique skills and powers. With his newfound super powers Ben has to learn the responsibilities of being a hero. During their vacation, the Tennysons are attacked by various enemies ranging from space aliens to supernatural entities.

Call me a curmudgeony old bastard, but I hate most of the animated kids shows of today. The majority of them  feature hyperactive weirdos running around thinking that they are funny. It’s just all noise to me, man. Give me some good ole’ retro cartoons with muscular heroes, truly evil villains and intros that feature some sweet  80’s synthesized rifts. But I digress. One series I’ve enjoyed in recent years is Cartoon Networks Ben 10. The show features a young whipper snapper who slaps on an alien bracelet that allows him to transform into a plethora of the galaxies toughest species. With this power he goes out and fights crime. Naturally. Unlike other kid shows, which feature an obnoxious amount of farting an zany behavior, Ben 10 delivers some good ole’ patented  family values, as well as the mainstay credo of trying to do the right thing. Suffice to say it’s fun and I’m a fan.

A while back, Joel Silver – producer of Sherlock Holmes, V For Vendetta, and the Matrix trilogy – had signed on to develop a live-action feature film based on the kid-targeted sci-fi franchise, with an eye toward distribution through Warner Bros. Word on this project has been quite for some time now, but MTV caught up with the show’s creators and they shared a few updates:

“We’ve met with Silver a couple of times but it’s very early in the development stages to really discuss it any further than that. Other than we are also equally as excited by the prospects.”

“It’s a live action film as far as we know. They’ve commissioned a script, which is exciting and we had a lot of cool conversations with Joel Silver the time we met with him about even which version it’ll be, what aliens kids like, and it’s super fun. But it’s super early, so not a lot has been firmly decided.”

Bah! I think if Silver has been sitting on the property for this long then he’s unlikely to make a move on it anytime soon. Plus, there has already been 2 live action made-for-tv films of Ben 10 which failed miserably. That can’t be a vote of confidence for any studio or producer. Though… it does sound like Michael Bay´s dream project.

If this stays on the shelf, it’s probably for the best. I suspect it would end up like the Last Airbender and Dragon Ball Z.

Those of us that have paid attention to the show Ben 10 already know what it’s about. Title character Ben Tennyson (clever), a boy with the power transform into 10 different alien creatures with the help of an alien device called the Omnitrix. The series became so popular it spawned two more shows, Ben 10: Alien Force and Ben 10: Ultimate Alien, it even received two made for TV movies directed by Bill and Ted’s Alex Winter. Well, they must have been doing something right, because producer Joel Silver (Speed Racer) has been brought on to develop a live-action feature film adaptation of Cartoon Network’s animated series.

Silver had this to say in a statement,

“I think we have to try something fresh and go at it in a way that stays true to the original material. I have a 5-year-old and a 9-year-old, so it’s somewhere between them. I tried to do (something similar) with Speed Racer and failed miserably. You always learn more from the ones that don’t work than the ones that do work.”

At least he’s honest about how bad Speed Racer actually was, he’s not trying to sugarcoat his mistakes. There’s where the difference lies though, as Speed was geared towards the older audiences that grew up watching it, Ben 10 is a much younger series that kids today actually recognize (I actually like it myself. One of the few good cartoons of today). It’s a smart move, hitting the strategy of  “Get’um while their young”, that’ll cement any future viewership if they plan to make this a franchise.

As of right now however, everything is still in the early stages of development as Silver and Dark Castle Entertainment  are currently looking for writers to adapt the project. Silver is currently preparing to get started on a film called Project X, set for next year, as well as Sherlock Holmes: A Game of Shadows, scheduled for December.

Here’s a little more of information on the show :

Ben Tennyson was a normal ten-year-old boy until the day he found the Omnitrix. Once he put on this mysterious alien device, he could not take it off but gives him the power to transform into ten different alien life-forms, and he became a reluctant superhero. With the help of his Grandpa Max and his spell-casting cousin Gwen, Ben now has to protect not only the world but the Omnitrix itself from Vilgax, an alien warlord determined to rule the Earth. 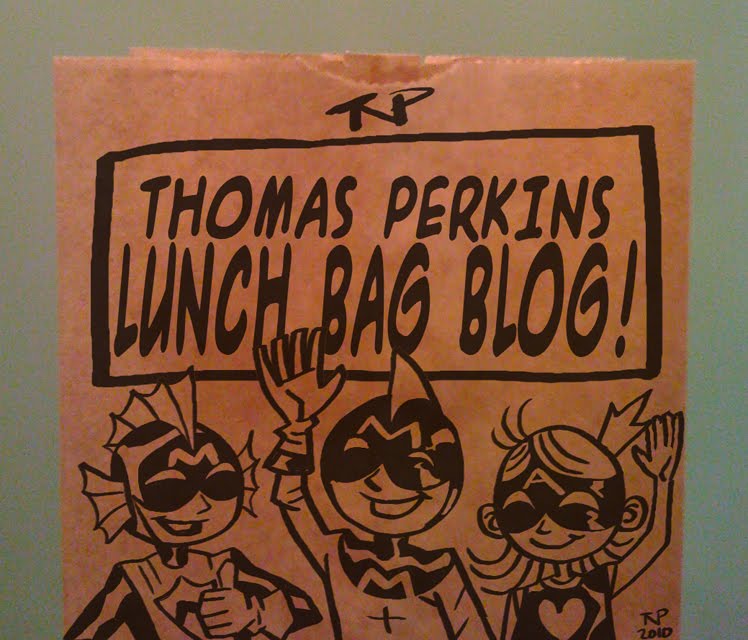 I stumbled onto Thomas Perkins blog tonight.  I found out that I have been a fan of his for a long time without even knowing it. Thomas Perkins has been a large part of many great cartoon favorites of mine.  I loved the Big Guy and Rusty the Boy Robot series, The Batman 2004-2006 series, Ben 10 and others.  Currently, Thomas is involved in The Avengers – Earth’s Mightiest Heroes cartoon series on Disney XD.  If your not watching it already go set your DVR, you’ll be glad you did.

What really got me going was his side blog, Thomas Perkins’ Lunch Bag Blog. Thomas posts the lunch bags he draws for his kids.  In his own words, “Herin shall you find my daily excursion to amuse my three children by decorating their lunch bags. As an animation designer I draw everyday, working to bring the Saturday Morning Goodness to the masses… but each day begins my doodling for my three munchkins in the endeavor to give them a grin throughout their day at school.” 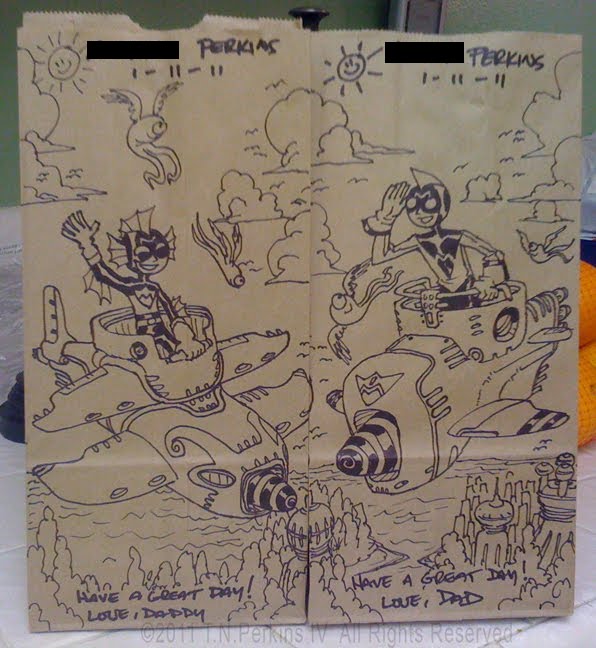 I imagine his kids get offers like, “I’ll trade you my oreo’s for your lunch bag.”  Who wants a Spiderman or Ironman lunchbox when you get an ever changing lunch bag like the ones pictured below?  I wish my lunch/snack bags I take to work were half as cool.  That’s a cool idea though.  Maybe I should start taking brown paper bags to conventions to have various artists make me lunch bags.  Those would look cool framed.

Tip of my Nerdbastard hat to you Thomas Perkins, you sir, are an artist and a gentleman.  Your kids are indeed lucky to have a dad like yourself.

You can check out more of Perkins lunch bags after the jump, which one is your favorite?

END_OF_DOCUMENT_TOKEN_TO_BE_REPLACED

With shows like ‘Ben 10’ and ‘ Generation Rex’, the guys of Man of Action Studios will be be the supervising producers for the first season of  Marvel’s ‘Ultimate Spider-man’. These adventures of a young Peter Parker won’t be around till 2012 on Disney XD, which means it’s gonns be a PG show. So much for hear Venom say they’ll “kill Spider-man”. Thanks to an email interview with the LA Times Hero Complex, we all get a special sneak peek at what the wall crawler may be showing the young viewers.

Check out the details after the jump: END_OF_DOCUMENT_TOKEN_TO_BE_REPLACED