Having suffered through horrid CG adaptations Scooby Doo, Garfield, Alvin and the Chipmunks, Marmaduke and The Smurfs, I’ve long past the point of saying “there goes my childhood”. I’ve reached the point of disappointment and dissatisfaction, that I’ve literally transformed into a burning red mass of hate and disgust; with cartoon like steam out of my ears. Is there really no one in Hollywood that can still write a decent kids adventure comedy? *grumbles*

To further illustrate the damnation of animated history, I present onto you, test footage from live-action/CG adaptions of Marvin the Martian and Hong Kong Phooey. Both were/are projects from director Alex Zamm (Beverly Hills Chihuahua 2, the upcoming Little Rascals).

In the combo embed you’ll find below, the first footage is for Hong Kong Phooey. It features Eddie Murphy (voice) as the kung fu pup talking with Spot, his sidekick cat. No crime-fighting is depicted. Just potty humor involving dog drinking from a toilet. Isn’t funny how the play up the staple of dog humor? *sarcastic laugh*

Then there is Marvin the Martian. I wouldn’t call this test footage. It’s more whole, almost like a full-on short. And, as a short, it’s rather cute. A kid hoping for an X-box for Christmas, opens up a box containing the pint sized Martian and comical destruction ensues. Again, it works for the few minutes shown. As a full feature, however, it would totally blow. The last thing the Looney Tunes name needs is a Marvin hopping around town with an immature kid.

Thankfully, Marvin never got fully developed. The project went kablooey. Hong Kong Phooey on the other hand, well that’s still happening. At least I think it is. Studios releasing test footage like this, however,  this usually means the projects are dead.

I really hope neither of these make there way to the big screen. At least not as full features anyway. I wouldn’t mind so much if they were shorts.

Check em’ out below and tell us what you think.

2nd Trailer for ‘The Adventures Of Tintin: The Secret Of The Unicorn’

The Adventures of Tin Tin is an 80 something year old European cartoon strip that struck the fancy of Steven Spielberg, Peter Jackson, Steven Moffat (Doctor Who) and Edgar Wright (Shaun of the Dead, Scott Pilgrim Vs. the World) & Joe Cornish (Attack the Block). And it’s only because of that orgy of nerd creatives that I have the slightest interest in Tintin. Eh, with the exception of Monty Python and Doctor Who, anything outside the US is out of interest zone. Plus, I flippin’ hate all CGI films with performance capture technology. The dead eyes of the CGI characters haunt me so.

With that said, the amount of detail in the texturing and animation in this is impressive. Plus, it has a Raider of the Lost Ark feel to it. So… I think I’m sold. Anyway, Paramount Picture has released another  full trailer for Steven Spielberg and Peter Jackson film, The Adventures Of Tintin: The Secret Of The Unicorn. Psst, wanna know what the secret is? It’s not really a unicorn… it’s a horse with a fucking tumor.

The film stars Jamie Bell as Tintin, the intrepid young reporter whose relentless pursuit of a good story thrusts him into a world of high adventure, and Daniel Craig as the nefarious Red Rackham. Bell and Craig are joined by an international cast that includes Andy Serkis, Simon Pegg, Nick Frost, Gad Elmaleh, Toby Jones and Mackenzie Crook.

The second feature in the series is scheduled to be directed by Peter Jackson, with a potential for a third film as well. Spielberg and Jackson will bring Herge’s stories to life employing state-of-the-art performance capture technology developed by Jackson’s Weta Digital. 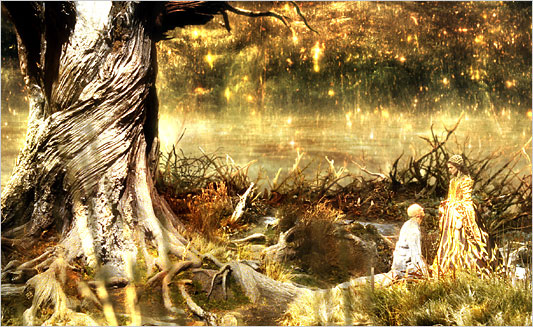 I’ve been saying this for years. Since Final Fantasy…Soul..Asylum? Whatever that flick was called…To Shrek 1…And finally with Beowulf using the beautiful voice acting of Brendan Gleeson and Anthony Hopkins. But there will be a war. Not between North and South or Black and White…No CG vs. Human Actors. The good thing is, the video is hilarious…The sad thing is, its TOTALLY TRUE!! Look at the heroes we have! Arnold? Stallone? Bruce Willis? COME ON!!! They couldn’t find any other actors to Battle the CG?! Watch and see how it all will end. Via /Film

Ha! I actually have the epic answer to this battle. Who is the epitomy of CG?….Thats right, Gollum. And who took his ass out??? Sam and Frodo!! HUMAN ACTORS. DONE, CHECK-FUCKEN MATE!