Head of Universal Speaks Ill of ‘Cowboys and Aliens’ and ‘Wolfman’

Rarely will one go as far as to publicly bury the movies their studio was responsible for making, but Universal‘s Ron Meyer decided to bring out the shovel and start digging…. deep.

While speaking to a crowd at the Savannah Film Festival, Meyer pulled no punches describing just how he really feels. Let’s just say you won’t be seeing the words “Fantastic”, “wonderful” or “Oscar worthy” anywhere in the following.

Meyer said “We make a lot of s***ty movies…Every one of them breaks my heart.”

If Ron has anyone to blame he could blame himself, as an executive he does have say in how a film can be constructed right up to the final development stages. At any point he could have pulled the plug on anything, but instead he just wants to bitch and boy does he ever.

On the comedy time and space traveling comedy Land of the Lost, starring Will Ferrell:

I give Ron credit for the Land of the Lost slam, since it really did suck something ferice, and the defense of Edgar Wright‘s Scott Pilgrim. Ron however, saved the worst of his venom for the Joe Johnston (Captain America) directed The Wolfman, starring Anthony Hopkins and Benecio Del Toro:

“One of the worst movies we ever made was Wolfman. … It’s one of those movies, the moment I saw it I thought, ‘What have we all done here?’ That movie was crappy. [The cast] was awful. The director was wrong. Benicio stunk. It all stunk.”

The cost of security alone is already going to cost him big, but after hearing such kind words spoken about their movies it will be some kind of miracle if Ron stays in Universal for much longer.

Rumor Control: Olivia Wilde is NOT The New Tomb Raider

Did you hear the rumor about superstar hottie Olivia Wilde becoming the next Lara Croft, which ran amok over the weekend?

Olivia, whose recent nerd-cred has sprouted thanks to Tron: Legacy, Cowboys and Aliens, and most recently in the Andrew Niccol directed In Time was “confirmed” to be involved in the reboot by Brazilian site Cinepop. Well, you can chalk this up to Hollywood hootenanny, because Olivia answered the nagging question through everyone’s favorite 140 character news space, her Twitter account:

Now, don’t get us wrong or anything, a new Tomb Raider movie is going to happen soon — producer Graham King of GK Films won the rights to the film and is looking towards a release date sometime in 2013. Angelina Jolie, the original Lara Croft, has passed on throwing on another tight one-piece suit, so the leading lady role is still up for grabs.

While it kills my boner, I’m so glad this got debunked. She would have been horrible as ‘Lara Croft’.

We’re still several days away from the release of Cowboys & Aliens, and parody videos are already on their way, but none of the have this kind of star quality.

Special Effects wizard and YouTube sensation Freddie Wong makes no budget short films that receive thousands of viewers per day. This video however, will be worth millions. Freddie and director Jon Favreau create a fun wild short film as a way to help promote the Universal Pictures feature for it’s July 29th release.

“Jon Favreau contacted us and gave us resources and full creative freedom to make a video about Cowboys and Aliens! This is what we came up with!”

As an added bonus here’s the behind the scenes footage for the making of Cowboys & FreddieW (ft. Jon Favreau).

END_OF_DOCUMENT_TOKEN_TO_BE_REPLACED

A new video featurette of the alien invasion western, Cowboys & Aliens, was released by Universal Pictures today in anticipation of its world premiere at the San Diego Comic Con.

In addition to some new film clippage, the video includes behind-the-scenes interviews with director Jon Favreau, screenwriters Alex Kurtzman and Bob Orci and executive producers Steven Spielberg and Ron Howard.  I will forever view Ron Howard as a Simpson, since it was on that show that I discovered his existence; seeing him in person is always really fuckin’ weird to me.

Check it out, and let us know what you think!

Perhaps it’s because this movie lends itself to a sci-fi western mindfuck, ’cause I got confused with Serenity for a moment and thought that Olivia Wilde was Summer Glau and would kill those bitchass extraterrestrials with her brain.  Oops.  But, hey, they’re both hot.

On a completely superficial level, this movie makes me think of Firefly and Serenity, which did an amazing job with the sci-fi western genre.

Universal Pictures has released an extended sneak peek of the upcoming movie, Cowboys & Aliens, out in theaters on July 29, 2011.  The film has strong leads and this extended trailer is definitely eye-catching.  It all comes down to how well director Jon Favreau executes this move and sticks his landing.

It won’t be another Firefly, but here’s hoping it’s a worthy addition to this nerdtastic genre!

More TV Spots Than You Can Shake a Stick At: ‘Rise of the Planet of the Apes’, ‘Captain America’,’Super 8′, ‘Cowboys & Aliens’

You know it’s summer movie season when your television is flooded with an insane amount of TV spots and trailers. Today we’ve collected the bunch that recently released for you viewing pleasure.

First is the newest spot for Rise of the Planet of the Apes. While I’m still on the fence about this film, I hold the originals very dear to my heart, I have to admit these apes look creepy real.

Synopsis: A single act of both compassion and arrogance leads to a war unlike any other — and to the RISE OF THE PLANET OF THE APES. The Oscar-winning visual effects team that brought to life the worlds of Avatar and Lord of the Rings is breaking new ground, creating a CGI ape that delivers a dramatic performance of unprecedented emotion and intelligence, and epic battles on which rest the upended destinies of man and primate. Opens August 5th.

More TV spots for Captain America, Super 8, and Cowboys & Aliens after the cut.

END_OF_DOCUMENT_TOKEN_TO_BE_REPLACED 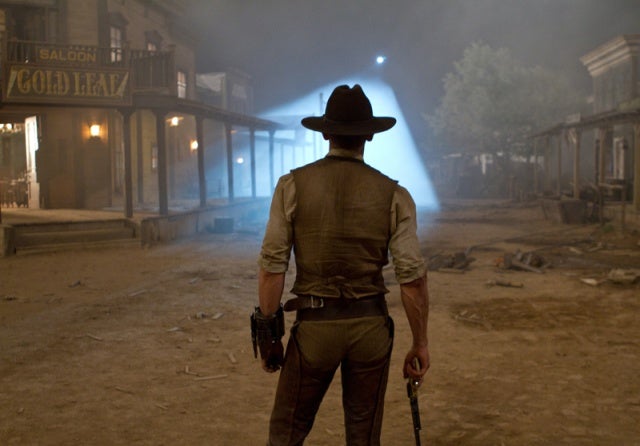 It’s got cowboys, it’s got aliens, it’s got Jon Favreau sitting behind it smoking a big fat celebration cigar in anticipation of it’s release. Yes internet,the Cowboys and Aliens director released yet another trailer alongside the 5 other trailers released in between the Super Bowl and Wonder-Con. Starring Daniel Craig, Harrison Ford and Olivia Wilde, this big budgeted western sci-fi hybrid is scheduled for release on July 29. If you are smart you avoided American Idol this evening, but in doing so you missed this awesome trailer. Thankfully Apple is hosting the trailer in High Definition. Check it out there, or it’s embedded below.

Can an Alien fire a six-shooter?

If this looks all to familiar that’s because it is, it’s pretty much a mash-up of the Super Bowl commercial and the teaser trailer. However they did throw in some new footage alongside some clever editing and music changes, but Jon is still holding back. Like a child hiding his toys, Jon still has something hidden away for another time and he’s doing it perfectly. Where most movies can be summed up in their trailers, Favreau has been able to only reveal just what he needs to and keep the audience drawn in.

Is there anything that perked up your interests, did sell you on the movie or make you want to get on your horse and ride away?

It’s officially spring, and the sun is shining, birds are singing, and some kick-ass movies are coming out soon! Are you excited?

With a whole bunch of superhero movies (Thor, Captain America: The First Avenger, Green Lantern and X-Men: First Class) and plenty more blockbusters like Pirates of the Caribbean: On Stranger Tides and Cowboys and Aliens, it’s going to be one hell of a summer.

If you’re not excited, what’s wrong with you?This summer is going to be great.

Luckily for you, the website Screenrant.com has put together a pump up trailer for you showcasing what are sure to be some of the best movies coming out.

So sit back, relax, and prepare to get excited!

Cowboys and Aliens a film about well, Cowboys and aliens is being brought to us by Jon Favreau is an epic tale set in the wild west (think The Good, The Bad and The Ugly with an alien invasion thrown in).  This movie seems pretty sweet and the cast is unbelievable; There’s everyone from Harrison Ford to Daniel Craig and Olivia Wilde.  In addition to having an incredible action and comic book movie director like Favreau on board Ron Howard and Steven Spielberg are also in hte mix and producers.  The plot details reveal,

1873. Arizona Territory. A stranger with no memory of his past stumbles into the hard desert town of Absolution. The only hint to his history is a mysterious shackle that encircles one wrist. What he discovers is that the people of Absolution don’t welcome strangers, and nobody makes a move on its streets unless ordered to do so by the iron-fisted Colonel Dolarhyde. It’s a town that lives in fear. But Absolution is about to experience fear it can scarcely comprehend as the desolate city is attacked by marauders from the sky. Screaming down with breathtaking velocity and blinding lights to abduct the helpless one by one, these monsters challenge everything the residents have ever known.

Now, the stranger they rejected is their only hope for salvation. As this gunslinger slowly starts to remember who he is and where heÂ¿s been, he realizes he holds a secret that could give the town a fighting chance against the alien force. With the help of the elusive traveler Ella, he pulls together a posse comprised of former opponents – townsfolk, Dolarhyde and his boys, outlaws and Apache warriors – all in danger of annihilation. United against a common enemy, they will prepare for an epic showdown for survival.

The trailer just came our way today and is compiled mainly of footage shown at Comic Con. Now while there isn’t a lot to the movie which follows closely to the comic, it just seems… fun!  And with a Summer 2011 release date it should definitely be a great blockbuster to check out.

What if Pixar’s Toy Story wasn’t just a story about toys, but instead an action film about a Spaceman, a Cowboy and their friends? It might resemble this awesome piece of fan art created by UK artist Sean Izaakse. Seeing these classic characters re-imagined as hardcore gritty comic book designs is pretty damn cool. If this were a poster, I’d buy it for a dollar.

see a full design after the jump