Ever since Guillermo del Toro’s sci-fi blockbuster Pacific Rim has been in the works, there has been promises of a sequel, and mind you this was even before the film hit theaters, but Pacific Rim 2 has been stuck in development since 2014. Originally the sequel was scheduled for a 2017 release date with production said to start in 2015. But Pacific Rim 2  was eventually pushed back by  Legendary Pictures and Universal Pictures and production was delayed with no confirmation on when they’d start.

END_OF_DOCUMENT_TOKEN_TO_BE_REPLACED

Ask the Bastards #13: Because Yes, We Are Still Talking About Star Wars Episode VII

Welcome to another ridiculously ridiculous (oh yeah we went there) installment of Ask the Bastards, the weekly feature where you the readers get to ask us, the staff of Nerd Bastards, anything you want about the world of geekdom. This week, we’re talking Star Wars, because at this point it seems like there won’t be a point in the next three years when we’re not talking about Star Wars, but we also make time for some questions about our geeky guilty pleasures, and we try to name the best video game of all time.

END_OF_DOCUMENT_TOKEN_TO_BE_REPLACED

‘Prometheus’ – Gets a Rating and Potentially Devours a Del Toro Film

Just weeks before opening weekend, 20th Century Fox has announced that Ridley Scott’s Prometheus has finally received its official rating of “R”.  While some fans were worried that the film might be gimped to make a PG-13 rating (and thus more monies), Ridley Scott plus Aliens universe does not a children’s movie make.

The official rating was bestowed upon Prometheus for “sci-fi violence including some intense images, and brief language.”  Damn.  I was hoping that “repeated full-frontal nudity” would have been on the list.  I guess you can’t have everything.

In other news, Guillermo Del Toro expressed his concern that his At the Mountains of Madness project may suffer due to Prometheus’s success.  Del Toro’s adaptation of the H.P. Lovecraft story was shelved earlier due to budgetary reasons, but there is always a chance that production could resume.

Del Toro, however, believes that chance may be slim-to-none because of the various similarities between Lovecraft’s story and Prometheus.  In a recent interview about the subject, Del Toro spoke about Lovecraft’s influence on the Alien world and his concern that the two movies would be too alike to produce so close together.

When asked to elaborate, Del Toro had this to say:

“Same premise. Scenes that would be almost identical. Both movies seem to share identical set pieces and the exact same BIG REVELATION (twist) at the end. I won’t spoil it.”

Somehow, I doubt fans would be too upset if Del Toro made a scary Lovecraft horror flick.  It is, however, left in the hands of production companies who often don’t see the art of a movie as being preferable to cash money.  This is a shame, especially considering that At the Mountains of Madness could have ended up being the first H.P. Lovecraft adaptation that didn’t completely suck balls.

Regardless of the consequences, Prometheus set to open on June 8th of this year – and YOU should go see it cause it’s going to be freakin’ amazing.

Thanks to slashfilm and geektyrant for helping us out on this one.

Gaiman, Cameron, & Del Toro Set to Monkey Around With – The Monkey King 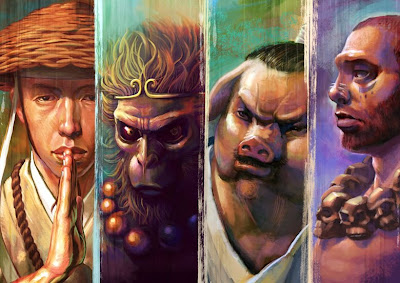 Google “Monkey King” and you’ll get some where in the 44 million hits range. An age old Chinese folk legend, the Monkey King has been in just about every kind of social medium, story telling, plays, books, comics, television, movies, anime, you name it and someone has done it.

So when Chinese TV producer Zhang Jizhong decided to take a crack at the Monkey King it wasn’t earth shattering news. Then Jizhong hired Neil Gaiman to write Journey to the West, a film trilogy of the tale of the Monkey King’s travels from China to India in search of Buddha’s scrolls. That’s news. Throw in James Cameron as a story and technical production advisor, sprinkle in Del Toro as the prospective director and you have an almost unholy alliance of talent.

Journey to the West will be shot in English, using a cast of both Western and Chinese actors. Gaiman is mindful of how ingrained the legend of the Monkey King is to the people of China, but he’s excited about the project’s potential. Gaiman relates the Monkey King to another story told many times and in many ways, The Odyssey.

“There is nothing inherently Greek about The Odyssey. These are big stories that work with people. There are 2,000 pages filled with adventures. The delight and the challenge is to write a story that for 1.4 billion people is in their DNA.”