After almost 250 episodes and a slew of “what ifs” debunked, Discovery’s super-cool TV show MythBusters will go off the air after its upcoming 14th season.  Show co-hosts Adam Savage and Jamie Hyneman, now pop-culture staples themselves, made the decision in conjunction with the network to wrap the show in 2016.

END_OF_DOCUMENT_TOKEN_TO_BE_REPLACED

I think it’s safe to say everyone loves Mythbusters. Adam Savage and Jamie Hyneman, often joined by Tory Belleci, Kari Byron and Grant Imahara, get a chance to do all sorts of cool shit with high explosives normal humans would never be allowed to. For good reason, the stunts they pull off are really, really dangerous. Like their most recent experiment involving a cannonball which went awry when the six-inch projectile tore through a nearby neighborhood.

Here’s the report of the incident from the San Francisco Chronicle,

The cantaloupe-sized cannonball missed the water, tore through a cinder-block wall, skipped off a hillside and flew some 700 yards east, right into the Tassajara Creek neighborhood, where children were returning home from school at 4:15 p.m., authorities said.

There, the 6-inch projectile bounced in front of a home on quiet Cassata Place, ripped through the front door, raced up the stairs and blasted through a bedroom, where a man, woman and child slept through it all – only awakening because of plaster dust.

It exited the house, leaving a perfectly round hole in the stucco, crossed six-lane Tassajara Road, took out several tiles from the roof of a home on Bellevue Circle and finally slammed into the Gill family’s beige Toyota Sienna minivan in a driveway on Springvale Drive.

Damn. Can you imagine!? Luckily no one was injured. Had the cannonball hit anyone they would have been destroyed on the spot. No word yet on if the stunt will appear on television.

Discovery has issued a statement explaining the accident,

During the testing, a cannonball took an unforeseen bounce from a safety berm. No injuries were reported, but damage was reported in one Dublin home and one parked car.

Sgt. J.D. Nelson, Public Information Officer and bomb technician for the Alameda County Sheriff’s office, who is a regular safety explosives expert for MythBusters, was on site and all proper safety protocol was observed.

Beyond Productions is currently assessing the situation and working with those whose property was affected.

A local news report  is also available which give you a clearer picture of how far the cannonball traveled. How far? Really fuckin’ far!

Everyone’s entitled to make mistakes, granted most of us aren’t handling something quite as dangerous as a six-inch cannonball hurtling over 700 yards, but shit happens. Again, thankfully no one was hurt or this would have been a terribly different news story. I do hope they somehow work the stunt into an episode. Who wouldn’t love to see Adam and Jamie’s faces when they learn where the cannonball ended up.

The Hub; New Kid’s TV Channel You Should Be Watching

Today’s kid television programs are never as good as the ones you watched in your childhood. There are few exceptions, Adventure Time is show I’m currently obsessed with and am DVRing like mad, but it can’t compete with the toons I was raised on. Batman, Transformers, Teenage Mutant Ninja Turtles; the eighties and nineties were full of such stellar animated goodness wouldn’t it be nice to revisit those years?

Discovery Communications and Hasbro (two companies we nerds have a lot to thank for) have created a new TV channel geared for children and families to watch together. It premiered last October, 10-10-10 to be exact (aren’t they clever). The Hub, available on digital cable and satellite, is a channel bringing a combination of family friendly entertainment. I know what you’re thinking, family friendly? What the hell, we’re nerdy bastards, we specialize in decidedly un-family friendly fare, but give me a chance to explain. While family friendly their programming may be it is also nerdtasticly nostalgic. Not convinced? Let’s talk about some of the gems they’re airing.

END_OF_DOCUMENT_TOKEN_TO_BE_REPLACED

Science Channel to Explain How Lightsabers Are Built 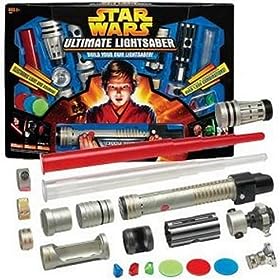 You know you want it.

Set your Tivos — lightsaber technology will be the focus of the premiere episode of a new series on the Science Channel tomorrow, Dec. 1.

The new show, “Sci-Fi Science: Physics of the Impossible,” debuts tomorrow and aims to explain the cool stuff from science-fiction movies in a way that nerds and non-nerds alike may understand. In the premiere episode, Dr. Michio Kaku, the author of Physics of the Impossible, attempts to build a lightsaber. I hope he has the right kind of focusing crystal, lest everything go awry.

In the episode, Kaku also explains how a portal from Stargate might be created.

Check your local listings for the airtimes of this nerdy new show. Thanks to GeekTyrant.com for the tip.

By the way, if you want to try your hand at building your own lightsaber, visit Amazon.