Get ready for Freddy. Again. A Nightmare on Elm Street is so often credited with building New Line Cinema into a studio brand name, that it should be no surprise that they’d want to play up that legacy again with a remake. Of course, the fact that the nine films in the series have a total worldwide box office take of over $450 million also sweetens the deal. Yes, unsurprisingly, and despite the lukewarm reception for the 2010 remake, we’re going back to the drawing board – and the dank, dark, foreboding cellar where young people are lured to their doom – for the fourth version of A Nightmare on Elm Street. END_OF_DOCUMENT_TOKEN_TO_BE_REPLACED

Freddy Krueger – a.k.a. Robert Englund – has been tearing up the interview circuit as of late due to the upcoming 30th anniversary (yes… you hear that right, 30 years!!!) of A Nightmare On Elm Street. Some of his anecdotes have been compelling to say the least, but one that sticks out in our minds is the revelation that he helped Mark Hamill secure his Star Wars gig, playing the role of Luke Skywalker. As it turns out, getting drunk and passing out on Krueger’s couch isn’t necessarily a bad thing. END_OF_DOCUMENT_TOKEN_TO_BE_REPLACED

Whenever Nerd Bastards goes to a con, we don’t just like to highlight the celebrity guests, news items and other things. No! We also like to put the camera on you, the fans. Those of you in costume anyway. So many fans get into an incredible amount of detail with their costumes, fret over the smallest detail and make sacrifices of comfort and mobility, so it’s only right that as we celebrate the culture, we also celebrate those that make the culture possible with their mad nerdiness. On this Thursday of Fan Expo 2014, we found judges, super-people, brains, robots, and something that looks suspiciously like something out of Will Graham’s nightmares. Also, some very impress LEGO sculptures were on display. All that, and MOAR, in this first photo gallery from Toronto’s National Fan Expo! END_OF_DOCUMENT_TOKEN_TO_BE_REPLACED

Robert Englund Suits Up As Freddy Krueger For A Worthy Scare!

From playing the part of Thug in ‘Manimal’ in 1983, then suddenly becoming a terror icon a year later as Freddy Krueger, Robert Englund’s sharknado of success was an immediate blessing. Like many typecast actors before him, Englund’s career as the monster from A Nightmare On Elm St.‘ locked him into horror roles ever since. Here it is 2014 and he’s got films titled ‘Death House’ and ‘Fear Clinic’ in post-production. But at least he’s working, and we haven’t seen him don the Freddy claws since 2003’s ‘Freddy Vs. Jason.’ That is, until we got wind of his latest return to the role! The dream fiend is back – but for once it’s for a greater cause beyond killing off an entire town’s population of children. END_OF_DOCUMENT_TOKEN_TO_BE_REPLACED

He’s seen The Exorcist about 167 times, and it keeps getting funnier every single time he sees it! Beetlejuice, love him or hate him, you can’t deny he is defiantly ‘the ghost with the most‘. [garabating]

ABOVE: To ensure your trip Back to the Future, take a ride in this TARDIS Delorean. This is all a part of the Worth 1000 Delorean competition. People have come up with some great ideas, but I think this one has my vote. [Worth1000]

END_OF_DOCUMENT_TOKEN_TO_BE_REPLACED

[One, two, Freddy’s coming for you- on PS3 and Xbox 360 in the newest piece of Mortal Kombat DLC content.]

Having played the newest Mortal Kombat game,  I’m happy to report (what most of you already know) that it’s a great mix of old-school and modern fighting conventions. Ed Boon and his creative team went back to MK’s roots. Back to the time of 2D arcade fun. The game play grabs the feel of Mortal Kombat 2.  The games animation, sound and graphics are top notch! Honestly, it looks and feels good. Oh, and the fatalities are brutal and gory as ever. The most obscene and ridiculous yet. With that said, can someone please explain to me what the hell Freddy Krueger is doin’ in Outworld?

There has been one question on the minds of Mortal Kombat fans around the world. It has plagued their every hour, their every night, and even their darkest nightmares. When can I finally get my hands-on Freddy and pit him against my favourite Mortal Kombat warrior? Well the time has come and Freddy will be available on PlayStation Network tomorrow and Xbox LIVE very soon!

A variation of the classic Wes Craven character, he comes out swinging with two of his signature razor gloves and DLC launch trailer.

Don’t get me wrong, Freddy looks like he’ll give you a rip roaring good time in between tearing your opponent limb from limb, but where do the character cross-overs end; do we want them to end?

Freddy Vs Jason Vs Ash: The Fan Film Edition

When people get sick of waiting for a sequel that’s never going to happen, they start to get downright desperate. Fans will do anything to see a another movie for a franchise that’s been dead in the water for years, anything from writing their own scripts to even holding protests for them. Trent Duncan on the other hand decided to go a different route, bypassed the studio big leagues and made his own kick ass fan film for Freddy vs. Jason vs. Ash.

Here’s a look at the plot:
Sisters Lucy (Maddie Bright) and Holly (Ashley Brooke) are stranded with their friend Danielle (Erica Lea Shelton) on the roadside as Freddy Krueger (Danny Zetwo) and Jason Voorhees (Cheyenne Hess) team up to hunt and manipulate the stranded ladies in order to transport Ash Williams (Adam Henrickon) back to this world and seek their ultimate revenge.

Judging by that ending we could see a possible follow-up to this fan made marvel someday and that’ll be a treat even the king himself would enjoy.

Happy Valentine’s day, while you’re getting chocolate and flowers ready for your partner New York is in full swing of the sweetest toy convention on the planet. The New York Toy Fair showcases the upcoming figures of the latest movies, games or television, as well as the latest in plush and vinyl creations. A four day convention running from the 13th-17th of February in a 350,000 Square Feet building filled with toys . With all these wonderful toys stretched from wall to wall what exactly is going to be there? Spend a few minutes here with us at Nerdbastards and we’ll show you a good time showing off a few of Toy Fair’s 2011 goodies. Just don’t expect a kiss at the end of this date, the most you’re getting is a friendly handshake.

Luke Gallagher, site editor-in-chief will be down on the show room floor today checking out all cool toys that are set for release later this year. He should have a full report on Tuesday. However, over the weekend the interwebs were spreading the Toy Fair gospel and revealing some pretty sweet toys. Action figures for The Walking Dead, Thor, Captain America, G.I. Joe, Star Wars and Transformers have blasted their plastic faces across the net. HIT THE JUMP to check out what’s been revealed thus far. Start dusting off those shelves.

hope you’re scroll happy because there is a lot to take in. A lot!

special thanks to fellow nerd sites Comics Alliance, geektyrant, bleedingcool and Kotaku for doing all the dirty work.

END_OF_DOCUMENT_TOKEN_TO_BE_REPLACED 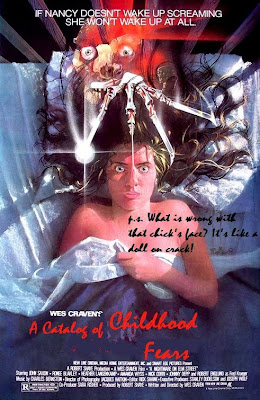 (’Retro movie review’ is a bi-weekly feature by guest writer Delilah Dawson. D. takes a look back at some of our generations best nerdiest movies and makes us appreciate them all over again.)
Because A Nightmare on Elm Street seriously messed me up. So did Piranha, but I don’t feel like I’m missing out on a lot of lake outings, whereas thanks to Freddy, I have:
The Top 10 Things That Wig Me Out
Because of This Crappy Movie
END_OF_DOCUMENT_TOKEN_TO_BE_REPLACED
Leave a Comment