Following a month’s long hunt for the perfect pair of pants, Jeremy and Jason have reconvened in front of recording devices and forgiven each other for everything they said in their dueling tell-all books. And they’ve done it all for you, Ghost of Jeffrey. END_OF_DOCUMENT_TOKEN_TO_BE_REPLACED
Leave a Comment

ABOVE: Sideshow Collectibles has unveiled pictures of Poison Ivy, the latest edition to the DC Comics Premium Format Figure collection. This super-sexy 1:4 scale figure measures 21 inches tall and features Poison Ivy along with her carnivorous plants  (If you know what I mean). Each is hand-painted and available for preorder now with delivery expected in January 2013. [Nerd Approved]

END_OF_DOCUMENT_TOKEN_TO_BE_REPLACED 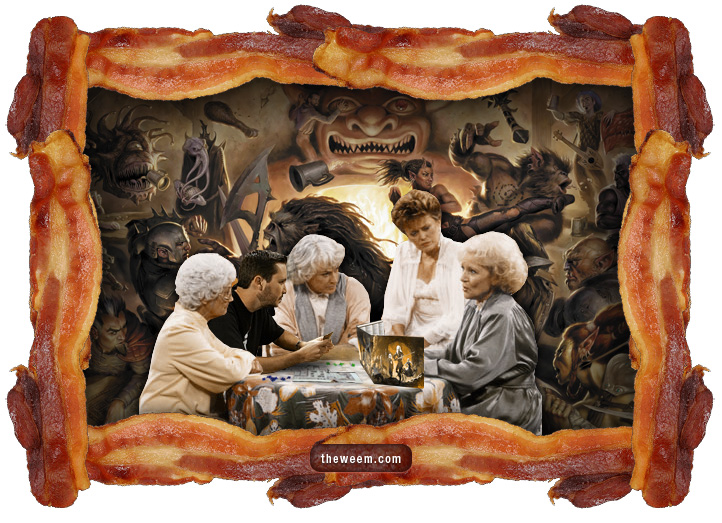 Have you ever had something or someone, that once you notice it or them, that’s all you see everywhere you look?  After posting the photo of Wil Wheaton in an elf suit giving the camera the finger . . . all Wheaton, all the time.  So I thought, I’ll check out some forums I haven’t been to in a while.  Posts in forums tend to take strange twists and turns that come out of no where.  The post starts out simple enough . . . What’s your best type of post?  I am reading down the thread, getting ready to throw out my two cents about the topic when, BLAM!  Suddenly I am inexplicably hungry, horny, and amused, all at the same time.

I see your Betty White, your Bea Arthur, and Estelle Getty and Rue McClanahan, and I raise you ALL of them playing D&D with Wil Wheaton in the middle of an iconic D&D bar fight, framed in bacon…

CarlZog did make one good point:

Going from a Bea Arthur raise directly to this is akin to a serious breach of double dog dare etiquette: socially awkward in its timing, but inspiringly bold in its execution.

What else could I possibly add?

LARGER IMAGE AFTER THE JUMP

END_OF_DOCUMENT_TOKEN_TO_BE_REPLACED

If you know what I mean… As in “she is more formidable than most with a 2-3 foot long blade.

“WTH did you think I meant?! You perverts are talking about my future wife! Not really, and I’m really quite sad about it. She’ll probably only be like a gilfriend/fling kinda thing…. Anyways, I’m a fan of anything that has a victorious Betty White and a dead B Arthur in it. Especially when it’s tied in to nerdy things i can relate to… “Uncle Ben NO!” Sorry, I have Star Wars shellshock. Enjoy these hilarious pics!

A Golden Review Of The Ipad From Betty White!!

Oh goodness, Betty White. Is there a more fair, sexy, intellegent, sexy, funny, or sexy woman? I think not. In her hilarious visit to The Late Show with Craig Ferguson she discusses some of the Ipad’s better features. And her raging alcoholism?.. Just kidding, that wasn’t a question, she totally does. As well as throwing a few low blows to Toyota and Craig Ferguson. I just love saucy old women.. I don’t even know what that meant. I’m a little distracted. There’s a Golden Girls marathon on and typing with one hand is destroying my focus. I have to start pacing myself if I’m going to hold up through the marathon. Well, enough talk of my shameful masterbation rituals. Please enjoy!