Every time I turn around I keep finding things that make me like Nathan Fillion more.  From the Steam punk episode of Castle (pictured above) to today’s great Easter egg find of Han Solo in Carbonite on the Firefly set.  From what I read below there is rumor that every episode has a shot of frozen Han.  Things like this make my Nerdbastard senses tingle.  I’ll leave it to you to guess where.

I have this geeky list.  It’s one of those lists you make when your bored and just fooling around with “What If”.  “If I won the MEGA Millions Lotto, which celebrities would I pay an appearance fee to come hang out with me and my friends at a backyard BBQ.”  Nathan just shot up about four places.  Well, one of those spaces is updating the deaths of those listed, but it’s still a big move up the list. 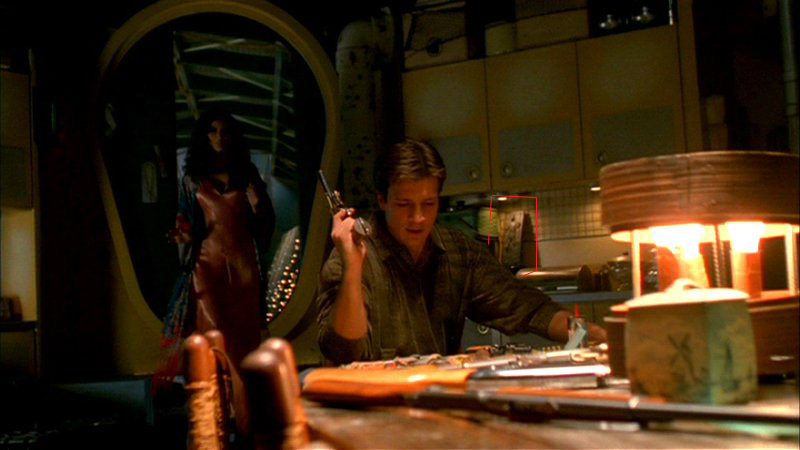 From Amy Ratcliffe of the blog Geeks with Curves:

I’ve been spending more time than usual looking up obscure references for all the nooks and crannies of Serenity.  In one of my many prop searches in the very late (um, early) hours when my eyes were drooping, I thought I saw Han Solo and Firefly in the same sentence.  That’s actually not so uncommon since Captain Malcom Reynolds is like Solo in more than a few ways.  I blinked.  No, the website said Han Solo in Carbonite and Firefly in the same sentence.

As it turns out, a Han Solo in Carbonite was brought on set since Nathan Fillion is such a huge Star Wars fan.  The props team joked around and added it to sets whenever they could, it apparently became a running joke.  It didn’t get grabbed out of every scene before shooting though.

END_OF_DOCUMENT_TOKEN_TO_BE_REPLACED

The Top Ten Nerdiest Pieces of Furniture In Existence

Think you have the nerdiest room in the universe?  (See above picture…that room is made of awesome and win.)  You clearly do not, if you don’t have every single piece of furniture we’re about to list out for you, as well as including a picture and describing each item for you.  Don’t say Nerdbastards never did anything for you, kids.  Here is the top ten awesomest pieces of nerd furniture we could find, submitted for your approval.

END_OF_DOCUMENT_TOKEN_TO_BE_REPLACED

Nerd Cake Of The Week: Han Solo In Carbonite

Though it may not top last weeks Dead Tauntaun cake I would say this is the second greatest Star Wars cake of all time. Cake maker extraordinaire and housewife Jen made this for her Star Wars obsessed husband. She says:

Han Solo in Carbonite Cake for my husband’s birthday. Took me 2 years to get the courage to put it together but I came through.

One may wonder if Jen shares the same enthusiam for Star Wars  as her husband or if she is just one super understanding wife. Eitherway her husband must never let this woman go.  The question remains, is the cake freezalicious?