It wasn’t long after the release of Suicide Squad that it was officially announced that Margot Robbie would be returning to the silver screen with her tattered hotpants and bubblegum dyed hair to reprise the role of Gotham’s colourful harlequin, Harley Quinn. The movie is suspected to step away from the relationship between Harley and the Jared Leto‘s Joker, instead moving onto the female influences in Harley’s life in the forms of Catwoman and Poison Ivy in the Gotham City Sirens story. Since then, though, not a lot else about the movie has been revealed. END_OF_DOCUMENT_TOKEN_TO_BE_REPLACED

The Yoga Hosers Are Here But Do We Want Them To Stay? 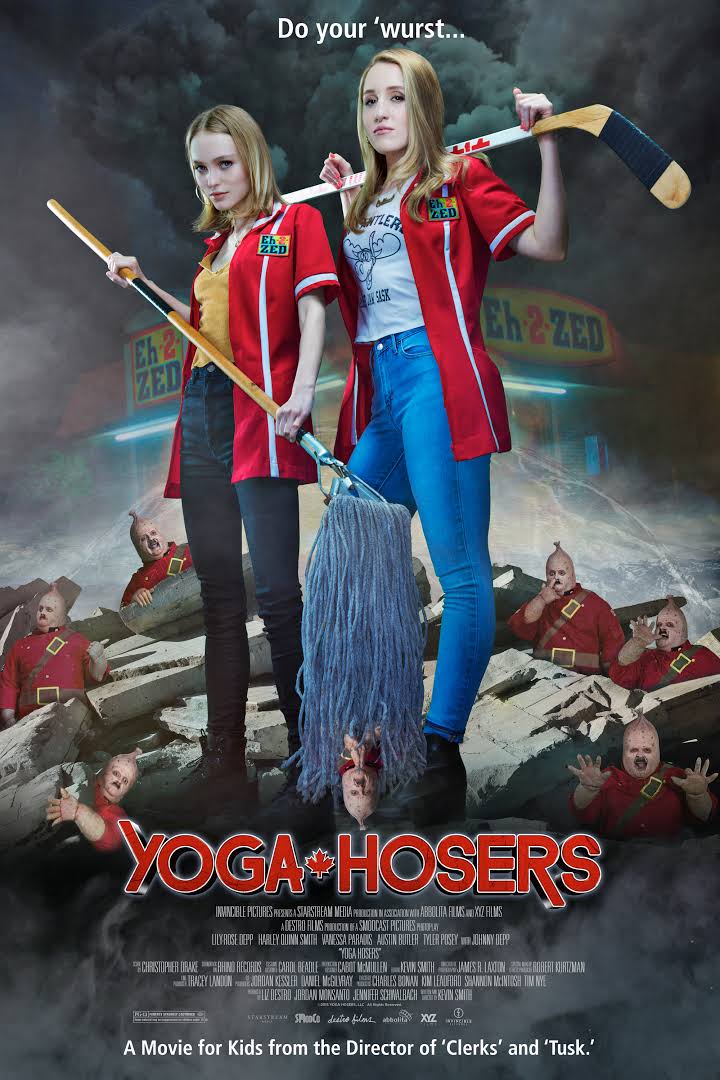 The latest trailer from love him or hate him director Kevin Smith has arrived. Smith has always been rather polarizing to audiences but his latest movie Yoga Hosers looks to stretch even the staunchest fans. It stars Smith’s daughter Harley Quinn, along with Lily Rose Depp, Johnny Depp’s daughter, as two convenience store clerks. Before you get excited about a throwback to the days of Dante and Randall, be advised – there’s a foot tall Nazi bratwurst (played by Smith himself) involved. Clerks 2.0 this is not. Still with a PG-13 rating subversive adult commentary on the world is not what Smith was intending. Yoga Hosers seems to be him having fun, the question remains do the rest of want to join in the fun? END_OF_DOCUMENT_TOKEN_TO_BE_REPLACED

One of Kevin Smith‘s recent slew of bizarre projects, Yoga Hosers is the second in Smith’s True North horror comedy trilogy. It appears betweern 2014’s Tusk and the bluntly titled Moose Jaws, which is due to begin shooting in the summer time of this year. The movie has already premiered at the Sundance Film Festival of January 2016 and now has an official release date for broader distribution, as the debut piece of new production company Invincible Pictures. END_OF_DOCUMENT_TOKEN_TO_BE_REPLACED

Uber sounds like a great concept on paper. All you have to do is download an app on your phone and you can request a ride whenever you want. On the other hand, getting a lift in some random guy’s car and chucking the concept of “stranger danger” out the window is naturally problematic. Ever request a ride from Uber and wound up with a driver who seems suspicious? Perhaps he was a passive-aggressive guy who treated you like his ex-girlfriend. Perhaps he smelled like cheap weed and tequila. Perhaps he isn’t even a real Uber driver and just faked being one to kidnap you.  END_OF_DOCUMENT_TOKEN_TO_BE_REPLACED

Potentially in reaction to everyone’s wish to see him team up with directors other than Tim Burton, Johnny Depp is teaming up with Kevin Smith to make the action-adventure movie Yoga Hosers. The movie marks the second in Smith’s “True North Trilogy”, which began with Tusk and are movies steeped in Canadian culture and mythology. In addition to being the follow up to Tusk, Yoga Hosers will feature the entire cast of Tusk, including Michael Parks, Justin Long, Haley Joel Osment, Genesis Rodriguez, Ralph Garman and Harley Morenstein.