With each new casting announcement we have to ask ourselves, is this really happening? Because it appears that the answer is yes. When Seth Grahame-Smith‘s revisionist spin on the Jane Austen classic Pride and Prejudice and Zombies hit bookstores in 2009, it was an insta-hit in the making. Blame the high concept of undead Austen, or blame the lukewarm reception to that other Grahame-Smith book adaptation Abraham Lincoln: Vampire Hunter, or even blame Canada, but for five long years there’s been no sign that P&P&Z was, ahem, coming to life on cinema screens. But now, it has a distribution deal, and two new cast members in the form of a pair of Game of Thrones actors. Prepare to be Lannistered! because Lena Headey and Charles Dance are coming for romance. And zombie killing! In that order. END_OF_DOCUMENT_TOKEN_TO_BE_REPLACED

Just when you thought this project had been buried for good, it comes back from the dead and bites and infect others. So it has happened again. As development on the long-in-the-works adaptation of Seth Grahame-Smith‘s cult-favorite spin on the Jane Austen classic Pride and Prejudice, Pride and Prejudice and Zombies, goes into full gear (again), another cult-figure has stepped up to help make it a reality. A man already well-known for his involvement in another British institution, has stepped into the important, yet not as flashy, role of Mr. Collins in the undead take on Austen’s seminal work. Doctor Who‘s Matt Smith is on his way to 19th century England, this time, to battle zombies and court romance. END_OF_DOCUMENT_TOKEN_TO_BE_REPLACED

Has Craig Gillespie Bailed on ‘Pride and Prejudice and Zombies’, Too!?

Nope. Turns out the rumor from earlier today that director Craig Gillespie had left Lionsgate’s film adaption of Pride and Prejudice and Zombies is false. Which is a good bit of news in a long list of bad news bears the film has had to endure.

Gillespie is developing the zombie-Austen novel by Seth Grahame-Smith with screenwriter Marti Noxon. The two collaborated on Fright Night which met fairly positive reviews. Does this speak to how they’ll fair in adapting PPZ? Is there a role they could cast David Tennant in? The fans need to know!

Source: Shock Till You Drop via /Film

Mike White to Direct Classy Zombies in Pride and Prejudice and Zombies!

So are you guys ready to see some members of the undead dressed in bonnets and cummerbunds?  Well, with a director in place we are one step closer to this vision.  Mike White, known for his writing School of Rock and Nacho Libre, is set to direct Pride and Prejudice and Zombies.  The classic Jane Austin story will be brought to the big screen with the help of writer Seth Grahame-Smith (The Hard Times of R.J. Berger, Abraham Lincoln Vampire Hunter).

Basically, it’s the timeless tale we all know but with zombieness filling in the gaps.  The idea spawned from Quirk Books editor Jason Rekulak, who was tossing around ideas of classic stories like Wuthering Heights and Crime and Punishment and characters like Ninjas and Pirates. Ironically enough I feel as though incorporating zombies will bring this story to life and be super funny as well.

The project is being handled by Lionsgate, who always turn out great work and now most likely will begin casting for the project.  As of now, Scarlett Johansson and Bradley Cooper are being considered.  The only thing to consider is that White hasn’t had much directorial experience.  He has only director one project prior to this titled, Year of the Dog starring Molly Shannon.  So while White’s writing certainly shows that he’ll get the tone of the movie, it is yet to be seen if he can accurately display it on camera.  So what do you guys think aout the news and this project coming to the big screen??

Do you like any of Jane Austen’s novels, such as Pride & Prejudice and Sense & Sensibility? Do you like Fight Club, the book and/or the film? Have you ever wondered what would it be like if Fight Club was set and written by Jane Austen? Probably not , but that’s where this video comes in. The clip that does the “what-if” mash up of Jane Austen and Fight Club is done really well and is definitely worth checking out. Maybe I just like it because it has Hotei’s Battle without Honor or Humanity playing on the background of the clip but then again, I do like watching girls fight.

Yes. I am a humble man. I try to not take too much credit, and I try to keep things humble-ized for the most part. This is not one of those times.

The Book that I reported on the DAY it came out “Pride and Prejudice and Zombies” is now being made into a full on flick!! At first when the book came out, I was pissed. I had one of those “How didn’t I think about that????”  Moments. So the news has hit the street that Jane Austen and Seth Grahame-Smith’s mash up of a novel is being done…And done well may I add, with the sexy nymph-like Natalie Portman taking the lead. END_OF_DOCUMENT_TOKEN_TO_BE_REPLACED 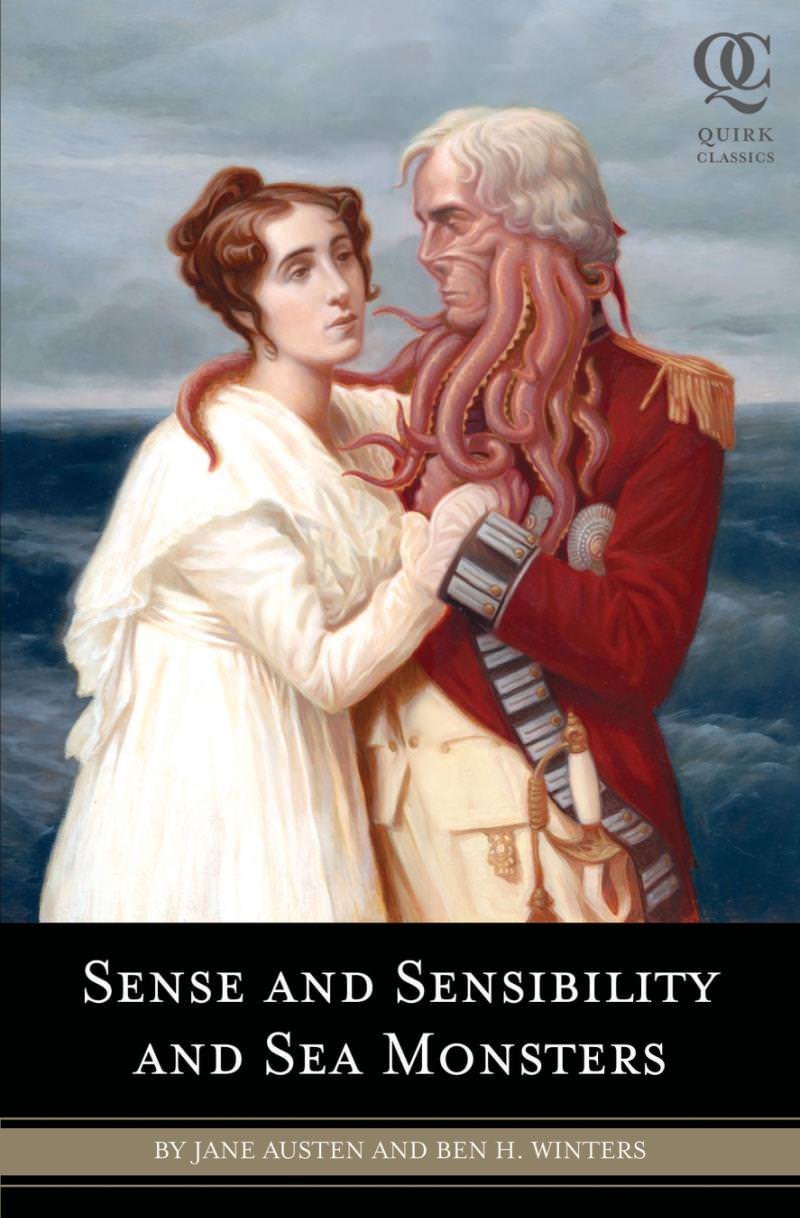 Not more than 2 weeks ago, I came out here telling you that a MUST READ for summer reading was Pride and Prejudice and Zombies.  Now news breaks, like sun on the horizon, and the genius that was P&P&Z is now being realized yet again in the world of  Stone Cold Jane Austen in the form of Sense and Sensibility and Sea Monsters!!!

60% of Austen’s work remains with Winters tormenting her original work with Giant Lobsters, Serpents, and Pirates!! The only thing that I find unsettling and absolutely fucked up about this is…..my raging envy and jealously as a writer that I didn’t think of this brilliance first!