Sam Raimi On ‘Spiderman 3’: “I Messed Up Plenty With The Third Film”

Considering all the hate that Spiderman 3 gets, it still has its redeeming qualities. However, the threequel is generally remembered as being a huge misstep for the web-slinger, with the over-cramming of characters and villains, the “emo” Peter Parker, and the “terrible job of bringing Venom to the big screen.” Moreover, having just come off the back of the critically acclaimed Spider-Man 2, it seems that the studio were wanting to up the ante the third time round. Thusly, what most people seem to forget is that a lot of the blame for the shortcomings’ in the third movie were due to studio interference. However, it seems that Sam Raimi has now yielded to the torrent of criticism and admitted defeat, which is a sorry state of affairs when it boils down to how it actually panned out. END_OF_DOCUMENT_TOKEN_TO_BE_REPLACED

Marvel’s ‘Spider-Man’ Would Have No Connection To Previous Movies…

It seems the interweb has gone into overdrive due to all the leaked information regarding Sony‘s Spider-Man franchise. The fact that we now know Marvel tried their best to acquire the character by reaching out to Sony, makes the leaked information all the more irritating. Taking a stab in the dark here, I’m guessing I wouldn’t be the only one thinking that it is time for Spider-Man to return home, where he will finally be able to join his crime-fighting co-horts. Sony need to stop beating at the proverbial dead horse, as they have done all they can with Spidey. Another (soft) reboot would be a horrific idea that would no doubt result is Spider-Man fatigue (some of us already had Spider-Man fatigue before the rebooted Amazing Spider-Man hit the big-screen). Come on Sony, …pass it on to someone with the Midas touch (Kevin Feige) and you can still make some money out of the franchise through a distribution deal. END_OF_DOCUMENT_TOKEN_TO_BE_REPLACED

Imagine if there were two parts to our world: one side that is the Top world and is vertically oriented from top to bottom, and another side that is the Bottom world where everything is upside down. Of course, both sides would hate the shit out of each other because humanity appears to have nothing better to do than to create discord amongst itself.

This is the premise of Upside Down, a sci-fi flick starring Kirsten Dunst and Jim Sturgess, directed by Juan Diego Solanas.  Solanas wrote the script alongside  Santiago Amigorena.  From the trailer, it appears to be a star-crossed lovers, Romeo and Juliet kind of dealie where two people from opposite worlds fall in love and society throws all the shit at them for it.  Although it appears to be less silly than Romeo and Juliet and West Side Story and other tragic romances that have followed along those same lines.

Check out the trailer below!  It actually looks pretty good; I’d actually be interested in seeing it.  At this point, there is no set release date or even a distributor so we’ve no idea when we’ll be seeing this film in theatres.  Chances are it’ll start off as a film festival flick and go from there.

END_OF_DOCUMENT_TOKEN_TO_BE_REPLACED

Child Stars All Growed Up! Scarlett Johansson Before She Took To Baring Her Tits, Where’s Little Anakin Skywalker Now? AND MORE!

I’m sure you spend all of your time wondering where the child stars of movies past are now. We’ve compiled a fair amount of before and after pictures for y’all to check out, some of which you probably expect and some of which will be a surprise to you. Let’s get started!

Let’s start with something that we all expect to see. Taylor Momsen is most known for her role as Cindy Lou Who in the 2000 film, How The Grinch Stole Christmas.  Over the course of the years, she landed a role on Gossip Girl and she’s now some badass singer chick.  Or something.  She blames her parents for her shitty attitude and bitchiness, actively tells young girls to twiddle themselves and flashes her tits at concerts.  No big deal.  She’s really matured!

END_OF_DOCUMENT_TOKEN_TO_BE_REPLACED

Spiderman 4 SCRAPPED!!! Reboot Is The Word! 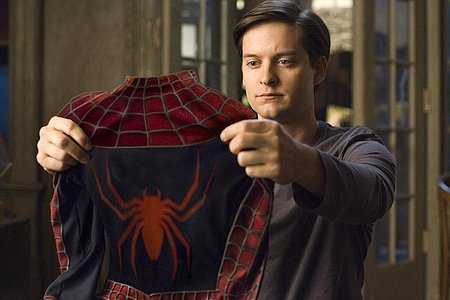 5 minutes off the presses of TheHollywood reporter, Spiderman 4 and COMPANY, Maguire,Raimi and Dunst, anr Gone with the Wind. And the biggest movie franchise of the decade is starting fresh. THR:

Columbia has scrapped “Spider-Man 4” and is rebooting the franchise.

The studio is parting ways with director Sam Raimi and “Spider-Man” stars Tobey Maguire and Kirsten Dunst and is taking the web slinger’s alter ego, Peter Parker, back to high school.

The new movie, which will have a new director and cast but still be produced by Avi Arad and Laura Ziskin and Marvel Studios, is eyeing a summer 2012 release. It will use a script by James Vanderbilt and put the focus back on a teenager grappling with normal teen problems while also dealing with his superpowers.

Well this will lend well to a group of nameless OC, One Tree Hill kids playing Spiderman. This is shocking news. Raimi, always the optimist:

Said Raimi: “Working on the ‘Spider-Man’ movies was the experience of a lifetime for me. While we were looking forward to doing a fourth one together, the studio and Marvel have a unique opportunity to take the franchise in a new direction, and I know they will do a terrific job.”