Announcement Trailer for ‘Lego Batman III: Beyond Gotham’ is Cute & Filled With Legos

The “Legofication” of the world continues, as Warner Bros. & TT Games released an announcement trailer for Lego Batman III: Beyond Gotham today. Pretty soon we’re going to be able to play all of our favorite characters in Lego form. I personally cannot wait for the Lego version of David Cronenberg’s Dead Ringers, just so I can see what Lego gynecological instruments look like.  END_OF_DOCUMENT_TOKEN_TO_BE_REPLACED

The BastardCast, a podcast (how original). A program barely alive (that’s harsh). Gentlemen (and woman named Karen. Hi Karen), we can rebuild it. We have the technology (microphone, headset, glass of Scotch, and a growing collection of robot sidekicks) we have the capability to build the world’s first bionic podcast (more or less). The BastardCast will be that podcast (tada). Better than it was before (is that really a challenge?). Better, stronger, faster (Kanye?). On the show this time, Jeremy, Jason, and the ghost of the American dream (TOPICAL!) plunder forth to discuss… END_OF_DOCUMENT_TOKEN_TO_BE_REPLACED
Leave a Comment

The BastardCast vs. a Pregnant Ron Perlman and The Rise Of The Kitties

This time on The BastardCast, Jason and Jason discuss sexy Stan Lee‘s sexy views on sexy sex, a Batman-less Batman TV show, the future of the X-Men movie-verse, and the possibility of a Pac Rim sequel that asks…

Is Ron Perlman pregnant with a Kaiju baby?

Also on the show, the boys wring out the Star Wars‘ schmatta rag to get a few drips of mango flavored rumor juice in their hairy, insidious mouths.

Do you want more? Fine! Cats are forging an alliance and taking over the streets and the guys are pretty sure that it’s all a part of a secret evil pussy plan.

Hey, wanna hear Jason yell about reality TV? We can do that for you.

Hey, wanna hear the boys discuss the future of meat? We got that too.

We have all of these things and also, Jason and Jeremy debunk the sticky and unfortunate fruit rollups as condoms urban myth ON The BastardCast.

The BastardCast: We just put the notion of raspberry ejaculate into your head.

ABOVE: Take your nerdiness to the beach with these hero-kinis from SciFeyeCandy. You can cosplay while you swim as Barbara Gordon, Harley Quinn or an X-Men (to name a few). [Fashionably Geek]

END_OF_DOCUMENT_TOKEN_TO_BE_REPLACED

ABOVE: At first glance you might think this is just another Lego Bag End, but you’d be wrong. It’s a freaking life-sized Lego Bag End! It took 3,000 hours and 12 people to create this awesomeness. Head over to Nerd Approved to see more photos.

END_OF_DOCUMENT_TOKEN_TO_BE_REPLACED

In LEGO Batman 2: DC Super Heroes, the Dynamic Duo of Batman and Robin join other famous super heroes from the DC Universe including Superman, Wonder Woman and Green Lantern to save Gotham City from destruction at the hands of the notorious villains Lex Luthor and the Joker.

LEGO Batman 2: DC Super Heroes allows players to explore all new areas of Gotham City utilizing a variety of vehicles including the Batmobile and Batwing. In addition, they’ll be able to fight for justice by mastering new gadgets and suits, such as Batman’s Power Suit and Robin’s Hazard Cannon, and using all-new abilities including flight, super-breath and heat vision.

Which DC character are you excited to see?

One Brick to Rule Them All – Lego granted LOTR License

Warner Bros. Consumer Products has awarded the toymaker the rights to create action figures and playsets based on “The Lord of the Rings” trilogy and the two upcoming films based on “The Hobbit,” the first of which bows at the end of 2012.

The multiyear deal grants Lego access to the library of characters, settings and stories of “The Lord of the Rings,” “The Hobbit: An Unexpected Journey” and “The Hobbit: There and Back Again,” all helmed by Peter Jackson.

The first toys Lego plans to produce will hit store shelves in June, tied to “Lord of the Rings,” with new construction sets planned for the weeks leading up to the Dec. 14 bow of “An Unexpected Journey.”

Imagine the great movie scenes recreated in Lego sets, just take all those fantastic Lego Star Wars sets and replace them with LOTR sets. My wallet is groaning as we speak. 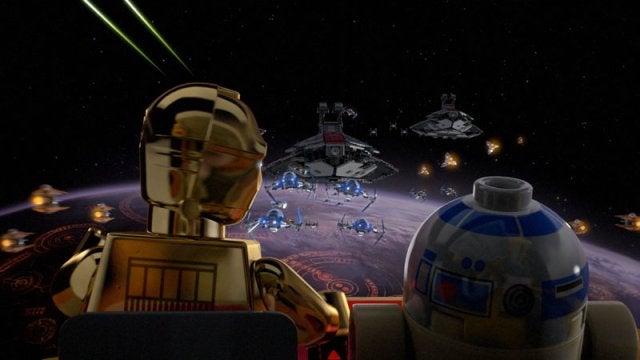 Cartoon Network has worked their magic and landed the rights to air the premiere of The Lego’s Group and Lucas Film 30 minute collaboration film Lego Star Wars: The Padawan Menace. If you’ve not seen the Lego’s Star Wars video games then you must not have a relative or child in your life below the age of 12. The video games and the Lego Star Wars building sets are hugely popular with kids and cough, cough, older Star Wars fans, making untold millions each birthday and holiday season.

The press release says pretty much everything you need to know and includes the plot synopsis at the end.

SAN FRANCISCO, Calif. (July 7, 2011) – After the runaway success of their wildly popular building sets, videogame collaborations and animated shorts, The LEGO Group and Lucasfilm will join forces once again for an all-new adventure – their first-ever original television special. Premiering on Cartoon Network on Friday, July 22 at 7:00 p.m. (ET, PT) in high-definition computer animation, the 30-minute original standalone special – LEGOStar Wars: The Padawan Menace – will feature the charm, action and irreverent humor that have become the signature style of LEGO Star Wars animation collaborations.

Featuring situations, characters and locations from throughout the entire Star Wars Saga, the original adventure is written by Emmy® Award winner Michael Price (The Simpsons) and produced by Academy Award-winning Animal Logic, the production company behind Happy Feet.

“We’re certain that fans of LEGO play and the Star Wars universe will be as  excited by this new original animated LEGO Star Warsepisode as we are,” said Jill Wilfert, vice president of licensing and entertainment for The LEGO Group. “Developing original animated content leveraging the LEGO and Star Wars brands is incredibly rewarding for us because it not only engages and entertains fans in original stories and adventures that further their imaginative play, it authentically delivers on the inherent values and fun that LEGO play brings to the partnership.”

To date, Star Wars isthe first and most successful LEGO licensed product collection in the company’s history, generating more than 200 LEGO models and approximately 275 LEGO minifigures inspired by the Saga, which has also spurred a blockbuster collection of videogames, selling 25 million units to date worldwide. In addition to its popularity among younger fans, a significant portion of the LEGO Star Wars consumer fan base is made up of nostalgic adults and franchise collectors.

A routine Jedi Academy field trip is turned into a rip-roaring comic adventure in LEGOStar Wars: The Padawan Menace. Tour guide Master Yoda leads a group of rambunctious Jedi younglings through Senate chambers when he senses a disturbance in the Force. Summoned to help save the Republic, he discovers that one of the younglings secretly boarded his ship…and has a taste for adventure! Meanwhile, C-3PO and R2-D2 are put in charge of the boisterous group and find themselves in over their heads. As the evil Sith prepare to wreak havoc, it’s up to Yoda and the droids to ensure that their young charges aren’t torn to bricks!

It’s time for rhymes, wookies, and a boy who lived in a desert who becomes a bad guy, but there was a New Hope! That’s right ladies and gentlemen it is the Star Wars Prequels done right. And done in Legos (or it is Lego?)- cool.

“There was a boy who lived in a desert- but nobody cares about him” is how the video begins.True story indeed! In 2 minutes, the same people who did the two minute Star Wars trilogy in 2 mins with Legos have another brief (George Lucas beware) sum up of the Prequels in 2 mins. Did I mention 2 mins? I will try for brief in tribute to these guys (who “they” are is not mentioned). Entirely in Legos with a narrative done by what sounds like a pre-pubescent boy, this video puts the three hella long movies (with exhausting wait times between each release) into a neat and extremely accurate lil package. I have no idea who would have so much time for what must have been a super intricate venture, but where I wearing a hat, i would tip it to the creators (do people still tip hats?). And we’re off! Once upon a time….you enjoyed a video clip.

Lego’s are truly an art form. There are conventions devoted to them, videogames based on their creations, and numerous videos showcasing the vast array of creative ways to use Lego’s.

But, I be no one ever imagine using Batman Lego’s to re-create a scene from one of the most critically acclaimed graphic novels ever, from 1988, The Killing Joke, written by Alan Moore and drawn by Brian Bolland.

The graphic novel centers around the Joker wanting to prove that any man, even Commissioner Gordon, can be driven insane by one bad day. This culminates in the Joker giving a monologue to Batman attempting to show just how insane the world is, and that is the scene that is faithfully recreated below.

Ohhh, and for those who want to know what the joke is in The Killing Joke?

See, there were these two guys in a lunatic asylum… and one night, one night they decide they don’t like living in an asylum any more. They decide they’re going to escape! So, like, they get up onto the roof, and there, just across this narrow gap, they see the rooftops of the town, stretching away in the moon light… stretching away to freedom. Now, the first guy, he jumps right across with no problem. But his friend, his friend didn’t dare make the leap. Y’see… Y’see, he’s afraid of falling. So then, the first guy has an idea… He says “Hey! I have my flashlight with me! I’ll shine it across the gap between the buildings. You can walk along the beam and join me!” B-but the second guy just shakes his head. He suh-says… He says “Wh-what do you think I am? Crazy? You’d turn it off when I was half way across!

The video below, just like the graphic novel, is an amazing piece of work. Definitely check it out!