Reports today from The Hollywood Reporter reveals that Disney and Lucasfilm have found a writer and director for the Boba Fett movie. Theories run wild about whether or not we’ll see some more history behind the mysterious bounty hunter or if we’ll see him crawl from the sarlacc pit and escape his assumed death from 35 years ago. Disney seems to be amping up their Anthology series, Star Wars films set in the Original Trilogy era, with rumors of an Obi-Wan Kenobi movie and Lucasfilm eyeing directors. Will the movies continue to be financial successes? With the Han Solo movie’s advanced tickets sales doubling what Black Panther sold, it seems the force is strong with the Anthology series.

END_OF_DOCUMENT_TOKEN_TO_BE_REPLACED

If you haven’t been following Peter Mayhew‘s daily tweets of the original Star Wars script, that obviously went through many changes before and during shooting, then you’ve been missing an interesting look at how scripts evolve during the production process. A few days ago Mayhew tweeted out three pages of the original script that would have changed one of the movies most dramatic, and character building scenes, the duel and death of Obi-Wan on the Deathstar at the hands of Darth Vader. END_OF_DOCUMENT_TOKEN_TO_BE_REPLACED

It’s one of those questions that come up from time to time. Why the hell didn’t Obi-Wan just tell Luke the WHOLE truth about his father? Hell, he outright lied to the boy! I’ve often thought that screwed up the little bit of training Obi-Wan was able to give Luke, but perhaps Obi-Wan’s hands were tied. Tied by a higher power. Now we’ve got some unused footage that clears the whole thing up. END_OF_DOCUMENT_TOKEN_TO_BE_REPLACED

As a certain flamboyant protocol droid once famously stated:

Just two days ago this site was reporting the rumor that Ian McDiarmid would be returning as a spectral Emperor Palpatine in the next Star Wars flick (NOT as a clone, as he did in the comic miniseries Dark Empire).

NOW we’ve got word that Ewan McGregor will be jumping on the ghostly bandwagon, and will show up as the disembodied spirit of Obi-Wan Kenobi, just as Sir Alec Guiness did in Empire Strikes Back and Return Of The Jedi.

In both cases, the rumor comes to us via that inexhaustible wellspring of dubious Star Wars news: Latino Review.

Today’s rumor seems based solely on the word of unnamed “insiders” who apparently only talk to Latino Review, and an interview McGregor gave to Digital Spy last year where he said he’d be happy to reprise his role in Episode VII–IF he is called upon to do so.

They also claim that the fact that Sebastian Shaw as the ghost of Anakin was replaced by Hayden Christensen in the Special Editions means there’s precedence for bringing in McGregor as Kenobi’s ghost.

The problem with this reasoning is Alec Guiness was VISIBLY portraying Obi-Wan–as a human and a spirit–for three movies. Anakin was hidden inside Vader’s armor for the entire Original Trilogy… This allows us a bit of suspension of disbelief as to what he looked like under that mask. The replacement of Shaw was annoying, yes–but not totally without logic.

I’m not saying that this rumor is necessarily false, just that switching Shaw for Christensen in a three second scene at the end of ROTJ will have no bearing on whether or not McGregor returns.

Tune in tomorrow, when Latino Review will likely be swearing up and down that Warwick Davis will return as Wicket the Ewok–and HE’S Palpatine’s secret Sith apprentice.

Lightsaber Fight Scene From ‘Star Wars: Episode I’ … In Acapella

Remember the fight scene in Star Wars: Episode I where Obi-Won and Qui-Gon fight Darth Maul? Of course you do! Well, a comedian/musician named Matt Mulholland created a multitrack of himself performing “Duel of the Fates” by John Williams (the original song for this scene) in acapella. On his own. He’s also done a bunch of other acapella TV/movie covers if y’all are interested in checking that shit out. Definitely worth checking out!

Hey, I can make a living off using my mouth as my only instrument, too!

At the risk of becoming the Lego beat writer (Exhibit A), I have to show you another set of fabulous Lego creations. Super Punch has posted a few Star Wars creations made from the tiny, colorful blocks. It looks like these are from the Clone Wars movie. I love how Iain Heath portrayed the lightsaber with multiple thin bricks to show light and movement!

A few images are below, but head over to Super Punch for the full view. In addition, Heath has additional Lego collections at Flickr. 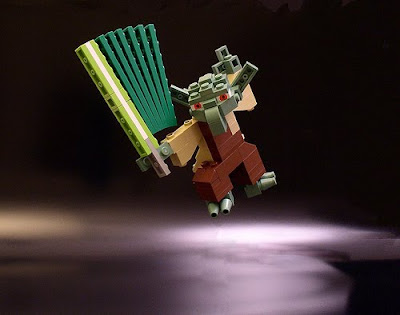 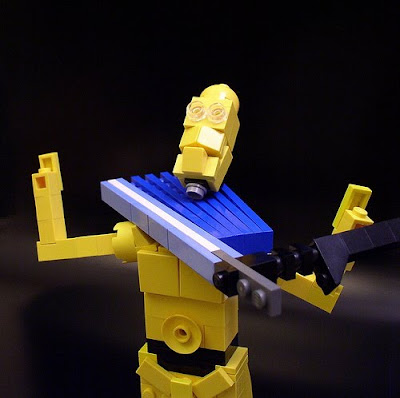