Marvel‘s new series Runaways has had a new trailer put on the Internet, not through official channels it seems, but the new Hulu bound series trailer does show the whole gang and sets up the series premise of super villain parents and the teenagers that discover their parents horrible secret. Check out the trailer below while it’s still up and running. END_OF_DOCUMENT_TOKEN_TO_BE_REPLACED

Today’s been a pretty interesting day for Marvel Television. Earlier today, we got our first teaser for the Netflix “street shows” big crossover, The Defenders showcasing Daredevil, Jessica Jones, Luke Cage, and Iron Fist as they team up to save New York. Well, it looks like that was just the tip of the iceberg as Marvel’s other upcoming streaming service show debuted a teaser as well.

END_OF_DOCUMENT_TOKEN_TO_BE_REPLACED

Are you one of the many Marvel fans that has been waiting for years to see Runaways brought to life?  Since it was announced that Hulu would be producing an original show based on the comic book series for the streaming service, eager fans have been patiently awaiting any bit of news on the progress of the production.  The comic book series, which focuses on a group of teens who find out their parents are part of a society of villains, has very loyal fans; fans that will likely be rather vocal when it comes to all aspects of the new Hulu series.  Today, Marvel brings good news to even the most discerning of those fans.  The Pride (which is the name of the aforementioned society of villains) has officially been cast and, as usual, Marvel got it right. END_OF_DOCUMENT_TOKEN_TO_BE_REPLACED

It’s getting so that there’s going to be a Marvel show on every channel, every day of the week! Following up on announcements concerning the casing of Cloak and Dagger earlier this week, Marvel TV is now announcing the cast for their other teen superhero show, Runaways. The hotly anticipated series based on the fan favourite Marvel Comic has been a long time coming, but the eventual Hulu series now takes a giant step forward now that we know the faces that that will be appearing on the show as various beloved characters. END_OF_DOCUMENT_TOKEN_TO_BE_REPLACED

Looks like the Marvel Cinematic Universe will soon have another sandbox to play in. Currently, we have the feature films on the big screen. On the small screen, we have Agents of S.H.I.E.L.D. and will soon have Damage Control (in development) on ABC. Marvel also has an untitled show in development by John Ridley (rumored long to be Kamala Khan) on ABC as well. On the Netflix side of the television world, we have the more gritty and “street level” superheroes Daredevil, Jessica Jones, Luke Cage, Iron Fist, The Defenders, and The Punisher. Marvel also has Cloak and Dagger on Freeform which will follow the heroes Cloak and Dagger described as a “superhero love story” with a YA twist. Now it looks like we will have yet another show for the small screen. This one will appear on the streaming service Hulu. END_OF_DOCUMENT_TOKEN_TO_BE_REPLACED 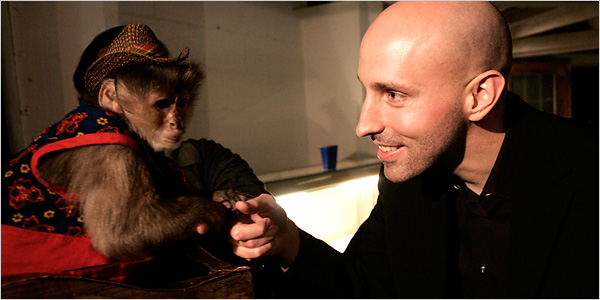 In another case of “What I really want to do is direct” Brian K. Vaughn -creator of such comic classics like Y: The Last Man, Ex Machina and Runaways- wants to get off the pages and get behind a camera.

BKV is a lord who blesses us with good stories. However, all of his top comics are at same stage of development for big-screen translation. Each moving at a snails pace, basically early production limbo. His best known property, Y: The Last Man, has been talked about for years, but nothing has come of it. And Runaways got put on hold as it’s less of a priority to the big name comic-book adaptations in the pipeline ( HR says they want to release it post-Avengers). Vaughn himself, recently left ABC’s Lost to write screenplays and generated some buzz with a film called Roundtable, but he’s itchin’ to get out there. Which is why he just signed with a new agency: Verve. While agency turnover is boring, The Hollywood Reporter’s recent story on the subject had a little nugget about Vaughan working on a screenplay he plans to direct:

Brian K. Vaughan… has signed with Verve. He was previously at CAA… A believer in the creation of original material, Vaughan is cooking up several new projects across various media, including a new screenplay on which he plans to make his feature directorial debut.

So, in addition to being part of the hairless club for men comic scribes (Bendis, Morrison, and him), he wants to step back from a medium that he is quite effective in and explore the possiblities of being a first-time director on a new comic-book type movie? OK, I get Vaughan is one of the best, underrated writers currently working in movies and the fact that he has yet to see his name on the big screen is a tragedy, but direct? Eh, I guess if you want something done right, you gotta do it yourself. Good luck, fucker.

Vaughan’s skills as a director are as yet unknown, but his instincts and abilities as a storyteller are strong. We await more news on his projects keenly.