Sony TV’s NSFW ‘Powers’ Trailer: Looks Like They Got It Right This Time

FX couldn’t bring it, but Sony TV has gotten Brian Bendis‘ Powers through Pilot production to series. Right off the bat we’re gonna warn you that there’s strong language in this trailer. Definitely not safe for work, or in front of small children. What this trailer does show is that Sony TV has an interesting look at Super Powers and the police that must try to… police them in Powers. END_OF_DOCUMENT_TOKEN_TO_BE_REPLACED

Yes, that’s true. I am doing a role in Neill’s new film, called Chappie, which we shoot in Johannesburg. I’m there for a couple of weeks at the beginning of next year.

So now we know that Jackman is joining Sharlto Copley, Ninja Visser and Yolandi Visser, but what role will he play?

Chappie is about a robot that is stolen by two criminals who want to use him to do their dirty work. We know that Coplay will be voicing the robot and Ninja and Yolandi Visser will be taking the two criminal roles. Over at Bleeding Cool Brendon Connelly thinks he knows what Jackman’s role will be:

END_OF_DOCUMENT_TOKEN_TO_BE_REPLACED

It’s only one of the most anticipated movies of the year, director Neill Blomkamp‘s follow-up to the critical and commercial smash District 9, but despite its original March 2013 release date, and its expected new release date just four months hence, we haven’t seen a lot of Blomkamp’s new project Elysium…

Yahoo has posted the first trailer for the film, and it looks amazing. Matt Damon plays a soldier trying to leave the dying Earth and become part of the stiff upper crust (the one per centers) who live on a lavish space station called Elysium, which is administered by Jodie Foster. District 9 star Sharlto Copley plays the villain, and while you’ll see him in the trailer, if you blink you might miss him. The trailer also gives us a good long look at both Earth and Elysium and hints at some of the action we’re going to see in the film (it’s not all high-brow sci-fi ideas and stuff, you know).

Plot Synopsis: In the year 2159 two classes of people exist: the very wealthy who live on a pristine man-made space station called Elysium, and the rest, who live on an overpopulated, ruined Earth. Secretary Rhodes (Jodie Foster), a hard line government official will stop at nothing to enforce anti-immigration laws and preserve the luxurious lifestyle of the citizens of Elysium. That doesn’t stop the people of Earth from trying to get in, by any means they can. When unlucky Max (Matt Damon) is backed into a corner, he agrees to take on a daunting mission that if successful will not only save his life, but could bring equality to these polarized worlds.

Elysium is out in theaters everywhere August 9th.

‘District 9’ Done In 60 Seconds, With Clowns 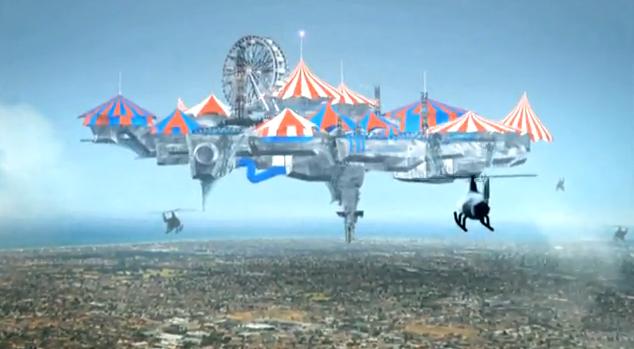 From the location right down to the gorilla style of shooting, Neil Blomkamp’s ‘District 9’ was a game changer for films in 2010. Now let’s shorten the film, retelling it in 60 seconds, and replace the alien prawns with circus clowns. Dublin, Ireland’s own Fat House Studio, known for their 60 second takes on film, spared no expense in their low budget take on the alien occupation and liberation. This would have been a version I’d like to have seen on the big screen, their clown shoes still wouldn’t have fit on camera though.

Take us to your big top

You don’t need a big budget to be this awesome at what you do, give these guys a movie deal Hollywood. They could make make even a Jersey Shore movie watchable.