No, I’m afraid Black Angel is NOT a lost chapter in the Star Wars saga itself. Rather, it was a companion short and directorial debut of Star Wars art director Roger Christian shown only in select areas back in 1980 when The Empire Strikes Back first opened. It was only screened in Europe and Australia, and after disappearing without a trace, was long believed to be an urban legend by many Star Wars fans until it resurfaced in 2011.

Hit the jump for more info, and two clips from the legendary film.  END_OF_DOCUMENT_TOKEN_TO_BE_REPLACED

Start Your Day With This ‘Back to the Future’ Inspired Short: Hoverboard

Check any “I’m still waiting for this, Science” meme and 99% of the time you’ll see that iconic Hoverboard that saved Marty McFly’s ass throughout the Back to the Future franchise. Everybody wanted one, even those of us that can’t stop falling off regular skateboards and busting our asses on hard concrete.

Director Sydney Freeland has taken that dream and made a short film to celebrate the desire that all Back to the Future fans hold dear to their heart, to hover on their very own Hoverboard. The short is part of the 2013 PBS Online Film Festival and after watching the short you can go vote for it on the PBS site as well as check out the other entries.

Coming in somewhere between a short film and a full length feature, Reboot plays above it’s modest budget and delivers a cinematic novella that benefits from its claustrophobic setting and it’s skilled cast.

Starring Emily Somers as STAT, a hacker who wakes up with her smartphone attached to her hand, bruises and blood on her face, and a slowly returning memory — the film keeps our attention as STAT and her friends Bren (Martin Copping) and Eva (Sonalii Castillo) try to solve the code that keeps ominously ticking down on her phone.

As the techno terrorist villain,  Travis Aaron Wade (who looks like Jeremy Renner) creeped me out. His character, Jesse, feels like the kind of villain that could be grounded in reality. A more grounded Bond-villain type with a bent mind that both luxuriates in and despises the digital realm and technology.

Through Jesse, the filmmakers ask questions about the value of connectivity, a “plague” that Jesse and his co-conspirators are dedicated to stopping with a potentially catastrophic act.

It’s scary stuff to consider as we become more and more reliant on technology and the filmmakers use those fears against us to drive the film toward it’s end.

I give Reboot 4 stars out of 5. It’s a taut thriller that demands your attention. Directed by Joe Kawasaki with a runtime of 39 minutes, you can download Reboot for $2.99 on their website now.

The Marvel Movie-verse to Expand with Short Films?

It’s been pretty clear from the beginning Marvel Studios is creating a universe all their own, with many of the same characters as the comic books but with slightly different origins and story lines. With their recent films, Iron Man, Thor, Captain America, they’re weaving these characters together with extra after-scenes and easter eggs in preperation for the big crossover film, The Avengers.

Today we’ve learned Marvel has more plans to connect their characters and films. The rumors have been floating around for some time but a “source close to Marvel Studios” (according to Film School Rejects) claims some pre-pre-production work has begun on a series of short films featuring secondary characters of the Marvelverse. The DVDs/Blurays for Thor and Captain America are already expected to feature short films starring Agent Coulson (Clark Gregg) so a plan to start preparing more of the same isn’t ridiculous.

Obviously this is a big MAYBE or IF as no one from Marvel has confirmed anything. I really hope it’s true because it sounds like a fantastic idea. The talk is these short films would either appear in front of feature Marvel films or as extras on the DVDs/Blurays, or hell, both! Wouldn’t it be awesome to sit down to see a Spider-man film and have a short in front about Black Cat? And what a great way for them to test out an actor or concept before attempting a full feature film (and losing millions). I think these short films would be a really smart move for Marvel so here’s hoping this comes to fruition. What do you guys think, any characters you think deserve a shot at a short film?

Antonio Banderas Get Creepy in ‘The Skin I Live In’, Boobs, Babes and Vikings in ‘Ronal The Barbarian’ and a Look at a Bunch of Other Nerd Approved Films

Sometimes there’s more to life than being really, really, ridiculously good looking (god bless you Derek Zoolander). And, I think actor Antonio Banderas has finally figured that out. The fucker will always be a sexy, suave spaniard (he is Spanish, right? I never paid attention) and I’ll always be really, really, ridiculously jealous of that, but I gotta give the Latin fury some credit for being in rare form and involving himself in one of the more unusual sounding films I’ve ever heard.

The film is The Skin I Live In by director Pedro Almodovar. It’s centered around a mad scientist Antonio Banderas and his obsession with creating an indestructible epidermis, no matter what pain he inflicts on his test subject.

“Your epidermis is showing!” What?

The 2011 Cannes Film Festival has released a brief but twisted scene from the film. It depicts Banderas’ character demonstrating his power over his helpless patient.

It’s perhaps a little too artsy fartsy and the subtitles don’t help (I got ADD) , but it’s got a lot going for it. Mad scientist. Skin. Torture and Tits. At least I assume there will be some tits. Can’t have a skin flick with out tits.

Ever since his wife was burned in a car crash, Dr. Robert Ledgard, an eminent plastic surgeon, has been interested in creating a new skin with which he could have saved her. After twelve years, he manages to cultivate a skin that is a real shield against every assault. In addition to years of study and experimentation, Robert needed a further three things: no scruples, an accomplice and a human guinea pig. Scruples were never a problem. Marilia, the woman who looked after him from the day he was born, is his most faithful accomplice. And as for the human guinea pig…

Speaking of tits. Are you ready for Boobs, Balls and Barbarians? Actually, the tag is “Babes, Balls and Muscles”, but shiiiiiiiiiiit, the makers of Ronal The Barbarian sure now how to market their little “runt of the litter saves the day” CG film. Any movie that has all that, plus a a skull belting out Europe’s “Final Countdown.” is enough for me to shout a Ric Flair “WOOOO”.

HIT THE JUMP for the trailer and while your down there check out some other upcoming Nerd Approved Cannes Films. *special thanks to i09 for doing all the work in rounding these up.

END_OF_DOCUMENT_TOKEN_TO_BE_REPLACED 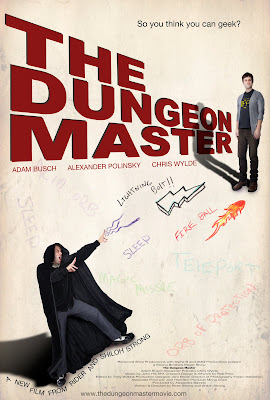 Remember when you used to play D&D? Ever thought of trying to recapture that feeling, what it might be like to dive the dungeon? The Strong Brothers have taken that idea and ran with it putting together a short film. The trailer is below so I won’t say anything else about it except the cast, music, directors info.

The ending kinda took the idea to a whole new level didn’t it? Not a good idea to piss off the dungeon master that can really put you into his game. I doubt they get multiple lives like Link, and I wouldn’t be surprised if their role playing skills took a dramatic turn upward.

After the jump you can check out a costume fitting video, which shows off more of the cast including the Barbarian Woman Fighter. There is also the Director’s Statement which is some interesting reading concerning the idea and direction the Strong brothers used to make this short film.

END_OF_DOCUMENT_TOKEN_TO_BE_REPLACED

This is either really bad or really good. Or somehow both at the same time.

Wolfgang Matzl remade Inception with 19th century style paper cut-outs, shot frame-by-frame on his digital camera, for the Done In 60 Seconds competition (where entrants recreate a movie in no more than a minute). His film was one of the 10 finalists in Berlin, Germany. Despite the limited time and production, the cartoon still has some of snappy visuals. The opening, showing an unfolding building, is particularly clever. So, Good animation but crappy voice acting and no music.via Cartoon Brew)

Well kiddies, I’m off to finish a job. In my dream.