It may not be doing Jurassic World business, but I’m sure that some of you, in spite of yourselves, have already seen Terminator: Genisys. You may have questions, like, how does Jai Courtney keep getting work? Or, why is the mean guy from Whiplash now more Mulder than Mulder? But seriously, there were a lot of left over questions from the film, presumably to encourage the audience to be proactive and ask so that we then start demanding a sequel. Mission: accomplished? Hard to say. I guess we’ll find out when the final box office numbers are tallied on Sunday afternoon, but if you’re one of those obsessive types that just can’t wait for answers, the Genisys screenwriters offer an answer. END_OF_DOCUMENT_TOKEN_TO_BE_REPLACED

Son of Dyson to Appear in ‘Terminator: Genesis’

I’m going to assume you’ve all seen, or are at least basically aware of the plot to 1992’s Terminator 2: Judgment Day–makes my life that much easier.

Now, he’s due to return as a young man and much more important character in Alan Taylor‘s Terminator: Genesis (Perhaps played by the sought-after young actor above).  END_OF_DOCUMENT_TOKEN_TO_BE_REPLACED 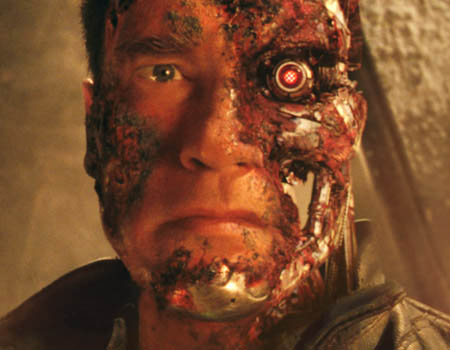 There’s a reason I often complain about rumors. Because not a week after we write about the possibility of the full cast from the first movie returning, Director Justin Lin says that it is absolutely incorrect, and that is not the way that he thinks. The Daily Blam has this quote straight from Lin:

“Everything has just been between me and Arnold… Just us going out and trying to find the right partners. I have certain elements, but it’s never been about, ‘Hey, let’s bring everybody back!’ I just don’t process that way.

“To me, thematically, there are certain things that I want to see in a ‘Terminator’ movie. A lot of that does draw back to creating this timeline that is an extension, closer tonally to the first and second movies. But to me, it’s not as mathematical as, ‘Hey, let’s get everybody back together and we’ll shoot the movie.’”

Ultimately, we are beyond happy that Lin is intending to ignore the existence of T3 and T4, as we have been doing. Also, I’m going to remind us all about something we already know, and will forget and soon as we hear the next rumor: rumors suck. But they give us something to talk about while we are waiting for a teaser, a trailer, and the final product. And when those come out, “I’ll be back”.