We’ve got a bit of everything for you today, so buckle down and prep yourself for the news buffet!

Green Lantern is a Fat Bastard

A few years back, Robert Smigel, the creator of TV Funhouse, wrote a screenplay for a Green Lantern comedy with Jack Black set to play the lead role. The draft is available online, and apparently it really fuckin’ sucks. After reading the mini synopsis on io9, I really don’t want to subject myself to reading this garbage.

From Smigel’s interview with Vanity Fair:

Basically just the premise that the wrong guy gets the ring and can do all kinds of goofy visual jokes-because the visuals are so potentially ridiculous. What appealed to me about it on a comedic level was that, in order to be a superhero, this requires no physical skill or talent. All it requires is owning this ring. Automatically, that’s a comedic premise. I was told they’re doing it as a comedy, that’s the way they’re going, so I didn’t really think about whether this was a wrong thing to do. I just knew that this was the movie they were making, and when I thought about the potential as a comedy, I felt like, yeah, I can do this…

That Spider-Man Musical in New York has been a whipping-post for negativity and snark remarks. Rightly so, it’s stupid and it sucks (scathing reviews, countless accidents, re-writes and creative changes galore prove it). It needs to DIE! Or, they should just let the boys from size fourteen entertainment take a crack at it. At-least they know what their doing.

On the heels of their Conan, Terminator 2, Total Recall and Commando masterpieces, the Kaplan boys are going out with their final Schwarzenegger Musical. With the toe-tapping, Predator-trapping ditty “If It Bleeds, We Can Kill It.”

I have been humming this all day. IF IT BLEEDS﻿ WE CAN KILL IT! This needs﻿ to happen. On Broadway. NOW.

There is so much good Arnie material left! It’s a shame this is going to the last vid in the Schwarzenegger cycle. This time, they reported on the news of the recent injuries from the Spidey musical set. Like most of their videos, the animation is hilarious and the portrayal of certain folks is done well. Check the video out as I’m sure something on it will make y’all chuckle and remember, no matter how much we crap on this musical, it’ll never be as good as this.

Spider-man Musical Allowed To Go On 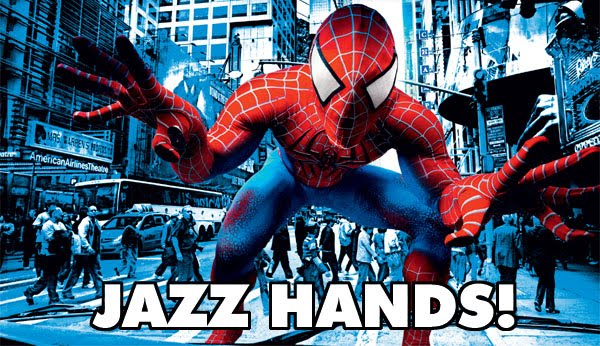 After Monday’s accident in which stuntman Chris Tierney fell 30 feet during the Spider-man: Turn Off The Dark musical, it has been determined that the show will continue to go on. Yesterday the Actors’ Equity Association and the Department of Labour said they would halt the production until further notice, well it looks like everything is back on track. After 36 hrs of work all the safety rigs and safety measures must be all in working order, what else could go wrong (knock on wood). The Julie Taymor and U2’s Bono rock musical will be back in the swing of things with tonight’s performance, this afternoon’s show was still cancelled.

With accidents like concussions, broken toes and broken wrists you’d think they would say “enough is enough” and hold off until everything is properly fixed. The production should be absolutely safe before risking the safety of your actors . Just welding a few joints and adding a bit of duct tape isn’t going to fix things here. This is just one big series of unfortunate events, each one more dangerous than the last. How long is it going to be until someone accidentally dies because the company didn’t take safety protocol seriously and just wanted to make back the estimated 65 million in costs.

Sooner or later if things don’t start going up for the most expensive Broadway musical in history then death is going to have a real reason to buy a ticket.

When something has such as long string of bad luck, it is not uncommon to believe that it is cursed.

And, the upcoming Spider-Man musical, entitled “Spider-Man: Alone in the Dark,” fits that description to the letter.

The play, directed by Julie Taymor with music written by U2‘s Bono and The Edge, has been delayed yet again. Not only that, last week two stuntmen broke some bones during the practice of a stunt.

According to the New York Times:

It’s supposed to be the biggest, costliest, splashiest show of the Broadway season, but so far it’s just the most troubled. Executives with “Spider-Man: Turn Off the Dark” said Thursday that the opening of the oft-delayed, $60 million musical would be set back once again, this time by three weeks, meaning it will miss lucrative Thanksgiving week, forgo an attention-getting bow over Christmas, and open during the box office doldrums of January.

The first performance was supposed to be in nine days, on Nov. 14, but this is a show that its famous creators — the director Julie Taymor and U2‘s Bono and the Edge — are laboring to finish. The two-dozen flying sequences are being worked out and still require safety approval from the state Department of Labor. The music, marking the Broadway debut of the U2 frontmen, still isn’t synchronized with special effects, plot and dialogue. Scene-to-scene transitions, essential for rhythm and safety, aren’t complete. Two actors have been injured hurtling through acrobatic rehearsal sequences.

No one can even say for sure if the musical will be two and a half hours long, as expected, until run-throughs start.

With all the problems the play is suffering from (the stunts, dialogue, music, scene-to-scene transitions, etc…) really makes you wonder. Will anything go right for this show?

MTV did an interview with the man, Stan Lee, about his thoughts on the upcoming Spider-Man: Turn Off The Dark Broadway musical. While the majority of folks on the internet has been trashing it, Lee, being the gentlemen that he is, was saying good things about it and hyping it up.

Lee goes on to compare it to other musical and circus acts, such as the Cirque du Soleil. He then jokes about how he has no idea if he can pull two cameos a day with the musical. You can watch the video posted below as it’s only a minute long and see Lee be enthusiastic about the project and who knows, maybe it’ll change your mindset about the broadway music… Oh, who am I kidding, it’s still going to suck.

Holy shit guys, it’s happening.  It’s really happening!  The much anticipated and long awaited, although never thought to actually come to fruition; Spider-Man: Turn off the Dark, is FINALLY here!  All the details were laid out for us on of all shows, Good Morning America?  Oh well, at least we have some details on this thing.  So U2’s Bono and the Edge sat down along with Julie Taymor to relay specifics about the musical.  So here’s what we know.  A guy named Reeve Carney is playing our beloved Peter Parker (who has an uncanny resemblance to Jared Leto).  In addition to that, Julie Taymor showed off some pics of the costumes.  One of which is the Green Goblin and another is of a villain who’s suit is made of knives!  This character, Swiss Miss,  is one of the new characters that has been added for the theatrical portrayal of the Spider-Man story.  The way it is explained was basically this is going to be Broadway’s way of topping the 3D experience of Avatar and giving it the middle finger by creating elaborate Pop-Up sets for NYC and the OsCorp Lab.  All in all this sounds pretty nifty.  Hopefully it will come together nicely.  So folks, all I have to say is between this and the reboot will we all be on Spidey overload?  Check out photos after the jump.