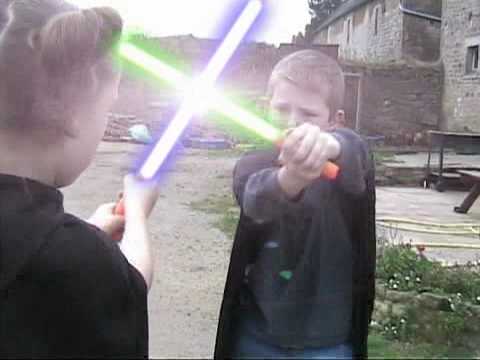 So here’s something stupid.

2 high-school students staged a mock fight inside their school lunchroom using Star Wars lightsabers as their weapons of choice. Really,  it was just a 30. sec display of nerds being nerds. That’s all it was.

“So one kid walked in from one side of the lunchroom and another one to the other side, and he called him out in a fight…And they pulled out their saber toys and in a joking manner proceeded to fight for a solid, like, 30 seconds,” said Kevin Carr.

“Everybody laughed at it…gave them a standing ovation. Nobody saw it as a big deal,” said Carr.

Well, the two Jedi’s antics resulted in both students getting a 10 day suspension. In a double whammy dick move from the administrator, the pair was also told they cannot walk at their own graduation. Wha?

“They very easily could have hit another student they could have started something different…someone could have gotten hurt,” said Westfield High School Principal Raymond Broderick.

They were “fighting” each other, not the whole god damn empire. It’s just two boys playing with their toys (zing), letting off some steam before the final weeks of school. They don’t deserve this type of punishment for making a room full of people laugh out loud. If they had wanted to get suspended they would have done the normal thing and cherry bombed the toilets or smeared poop on the Earth Science teachers desk, like normal teenagers. Check out how the local news handled the story:

I’ll be honest, these two have nothing to apologize for, they were just having fun. Their principle clearly has it out for nerds.