Top 10 Most Badass Swords in Cinema

Some of our favorite movies of marquee value over the last century have been extremely well acted, beautifully crafted and earned tons and tons of Oscar noms and wins. But we are forgetting a very crucial part of these films. Not the DP. Not the Grips. Not the Director or the small people involved behind the scenes that you never hear about, but something SO VERY CRUCIAL, the film cannot succeed without it.

What could it be, you must be asking yourself after the buildup I’ve created here. Here it is….The Sword. Yes, in any action film, fantasy or period piece, a good sword by the main character’s side is as important as a good actor…seriously. Here is a Top 10 List of The Most Badass Swords…If you got any of your own, throw them into the pot.

The LightSabre– The bar that ANY sword should be held to. Would be the Number 1 spot, but that is too typical. Hands down, would make scrap of any other weapon on this list. But we are here to give some variety. Plus, there’s the age old argument of why a lightsabre can cut through anything but another lightsabre. Sword and the Sorcerer- The dream of the NerdBastard was to own one of these as a child. Although TOTALLY super gay now in retrospect, at the time, was there a cooler sword?

Conan The Barbarian– Who other then Arnold could wield this colossal bastard sword? Cleaved scores of inept soldiers and creatures in two awesome flicks, and was available to buy. Badassery at its finest.

The Sword of Blade– The Half breed vampire slaying Daywalker, used this straight edge style katana to dispatch legions of bloodsuckers AND his own mother. It doesn’t get more badass than that. Also has a devise that is a spring loaded hand shredder to fuck up anyone besides him who grasps the hilt. 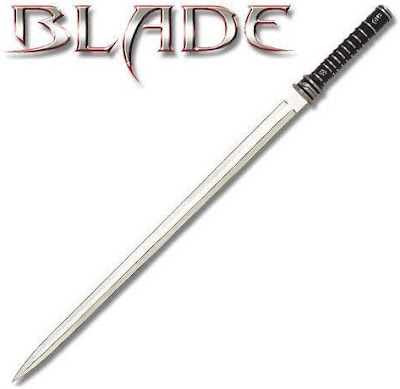 Sword of the Scorpion King– The Rocks 2 minute cameo in the Mummy Returns was capitalized by his one man massacred of the enemy army with his gorgeous, scorpian handled egyption blade.

Perseus’s Sword– In the old Clash of the Titans, this sword may have been a tad goofy, but was quoted as “What creates a sword…That can cut through solid marble..without leaving the slightest..Blemish..On the blade?……….And takes off the head of Medusa with one fell slice.

William Wallace’s Claymore- The Sword from Braveheart that Mel Gibson used to cut the limbs off of hundreds of English soldiers. In real life, the real Wallace was actually a huge dude, more capable of wielding that Claymore then Gibson. It was used as for the front line breakers in actual combat…But for cinema? Too Badass for words…

Narsil– The Shards of Narsil, the sword from Lord of the Rings was used to cut the One Ring from the hand of Sauron. Later reforged by Lord Elrond and turned into Anduril for the Aragorn to take up as the only King of Gondor….Not to mention fucking up a good few hundred orcs and Uruks by the ever razor sharp Narsil.

The Hattori Hanzo Sword– The weapon forged out of a blood oath to Kill Bill by his former master. The priceless weapon could cut through other swords and bone like butter. Leaving the bar during the showdown with O’ren Ishii littered with dozens and dozens of limbs and corses from the Brides destruction of the Crazy 88’s. The Hattori Hanzo Sword goes down in history as one of the most badass in film history.