The best of the best. Not the movie, the phrase. We are interested in the coolest, cruelest, ascending, transcending, fucken absolutely RENDING killshots in a film. The scene at the end, when the crescendo builds to a swell, all is lost, the hero is against the wall and the arrogant villain swaggers in for the final blow….

…But usually has some banter before hand and at that moment, JUST THEN!!!!! The hero turns the tides and gives the villain what he has coming to him….In some brutal Way, Shape or Form. And it makes us feel heroic and vicarious all at once…

Here is the Top 10 Best Villain Killshots….Not always a Killshot, but any denomination of brutal villain deaths!

10) Avatar–Colonel Miles Quaritch– AVATAR SPOILER READ NO FURTHER IF YOU HAVEN’T SEEN THIS FILM- This may be one of the newest films in release, but the justification of this coffee drinking prick getting smoked is extremely well received. It is also one of the rare instances when we get the female protagonist saving the day. When Neytiri is close to down for the count and being saved by Sully, it comes full circle when he needs some saving himself. The Colonel (in his Alien style /Matrix style loader) is lined up for the killing blow, when an arrow the size of a goddamned javelin nails him in the chest…The look on his face is nearly as startling as the second massive arrow slamming into him.

9) The Patriot– Colonel William Tavington-Jason Isaacs’s colossal prick does almost everything in the bad guy book to deserve his offing. Not just killing Mel Gibson’s son but killing TWO of his sons…And almost immediately following the murder of his seconds son’s wife! Also to add insult to murder, he torches Gibson’s home then later, his SISTER IN LAWS home!! When this fuckhead bites it…You breathe a little easier.

8) Gladiator– When Joaquin Phoenix’s Caesar fixes his own one on one battle with Russell Crowe’s Maximus by having him preemptively stabbed and poisoned or both, you believe it will be a beautiful death for Maximus. Until Maximus in the final blow, grabs the fine pointed blade thrust at him by Commodus and bends his arm backwards…To run him through his own throat with his own dagger. Joaquin crucified Maximus’s little boy and wife (after his army raped her) so….this was the least he could to for retribution. 7) Die Hard– Uber Villain Hans Gruber (the incomparable Alan Rickman), perhaps the classiest,funniest, and most evil villain to wear a suit. And he is at the end of his rope in the Nocatomi Building holding John Maclean’s (Bruce Willis) wife hostage. When Willis shows up with a gun taped to the back of his head, Hans doesn’t know it, and when he so arrogantly lets his guard down for a moment to be a prick, he takes a shot, and falls out the top level of a skyscraper…Now thats a kill with style! 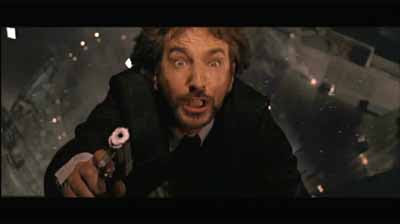 6) Lord of the Rings: Fellowship– So, we all know that there is no REAL final battle with Sauron, but there is a delightfully juicy one on one battle betwixt Aragorn and Lurtz, the head of Saruman’s Uruk-Hai. After Lurtz peppers Boromir full of arrows and is about to take a point blank head shot, Aragorn tackles on in, to take him on. As the Uruk has an arm sliced off and pulls Aragorn’s sword straight through himself fearlessly and defiantly in Viggo’s face, like lightning, Aragorn pulls his sword out like a flash and lops off Lurtz’s head with the fluidity of a poetic stanza. And the audience roared.

5) Robin Hood Prince of Thieves– What’s with Alan Rickman biting it hard in every movie he plays a villain? This time as the dastardly, deviously, deliciously, hilariously tyrannical, cousin killing Sheriff of Nottingham.  In the final fight scene when he is about to run Robin Hood through (Kevin Costner), his massive two handed bastard sword tip against Robin’s chest, he is distracted for only a split second by Maid Marion….And that is all it took. Robin uses this momentary lapse in judgment to pull his stiletto out and ram it through his diaphragm. Awesome killshot…Lotta drooling by Rickman… 4) Total Recall– Michael Ironside plays the murderous Richter  and is the bane of Schwarzenegger’s existence in this film. Richter has reason’s to be mad…Afterall Quaid was banging his wife (Sharon Stone) and then later shot her between the eyes. But the final kill scene comes up, Quaid gets the  …Upper hands?!!!LOL. While Richter is hanging from an elevator and is shredded limb to limb and falls to his death…With an insult to injury Arny quip, “See you at the party Richter.” As he throws his arms away.

3) Clash of the Titans– Perseus has lost all of his men…Turned to stone by the then and still terrifying Medusa. He is sore, tired and about to die a terrible death. As she slithers down a dark corridor, his back is against a pillar…We are getting afraid..It is the end..A trickle of sweat falls down Perseus’s brow, she comes into range..And he lashes out with his sword that can cut through solid marble…For a PG movie, the ensuing writing and screaming of the Titan, is proceeded by a blood pouring from the decapitation that has the same consistency as Ragu sauce. Awesome.

2) Jaws– Brody is all alone on a sinking boat….Quint is dead and Hooper is presumed dead…The Great White is coming in for its final kill.. With an oxygen tank in its maw, and chief Brody taking aim with a rifle..He says the coolest phrase ever for the Killshot, ” Smile you son of a bitch!” BANG!

1) Kill Bill 2– Seriously….These two films were made specifially to Kill. Bill. The epitome of taking out the bad guy. Uma Thurman’s “Bride” has a little mundane banter with the cucumber cool, lispy Bill before a literal 8 second fight scene. All these movies and waiting for THAT? Kind of a disappointment. But the final blow? The End all, be all, Killshot? The Five Point Palm Exploding Heart Technique.