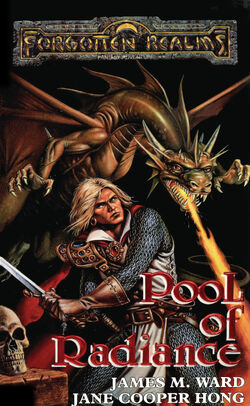 When not navigating the massive expanses of Middle Earth in the Lord of the Rings or the Silmarillion, there are other fantasy books that are ready to whisk you away to a Forgotten Realm. Books that don’t feel like infernal calculus or reading stereo instructions, and while I am a LOTR fan, they are a tough read. Stephen King is the equivalent of “See Spot Run” compared to that series. But the best? Well my friends, there are some nerd reads out there that feel like D&D in a bowl…Ahh, like geek potpourri.Take a whiff! The best of the best D&D books!

5)The Tainted Sword- A Forgotten Realms trilogy, the first and best of the bunch. I think this book, which was less fun and much more serious of a novel, had everything; a fallen knight, a chipper young chick to annoy said fallen knight, and a fight with a badass dragon. The book was released in 92′ so SPOILER ALERT, the hero actually meets his demise at the paws of the dragon and you find out the series is based on the annoying fledgling girl. Booooo.

4)The Thousand Orc War- A seasoned dark elf named Drizzt who nearly brought D&D books to the main stream. While not about to win the Nobel Prize, you get the good guy dark elf and his band of stereotypical D&D classes carving up a Frost Giant and not dealing with all the politics of a surly dwarf king. He also brawls nearly on his own with …A thousand orcs!! Or a few over that, but who’s counting. Not as smooth a read as some gamer fodder, but it goes down that way. Smooth.

3) Dragons of Autumn Twilight- A Dragonlance D&D book, brand name baby. A little tough to get through like LOTR, but much more session oriented. In fact I believe that the book was based on a gaming session of the authors. Awesome characters like Tasslehoff, a small Halfling like demi human that has a penchant for unintentionally finding his hands in other people’s pockets. …I have an Italian cousin who has the same problem, but they don’t call it “borrowing” in court, in the real world…It’s called grand theft auto.

2)The Hobbit- A fan favorite. An original gangster. A pioneer in D&D’s history to pave the way for the games creation. I don’t know for certain who coined the words “orc” and “hobbit” and “halfling”, but they are here..THIS IS WHERE IT BEGINS!!! AND THIS IS WHERE IT ENDS!!! In 1937 this book was published which is in itself, unbelievable. For some reason it doesn’t read the way the rest of the LOTR trilogy does, it has a different ebb and flow. Goes down a bit easier. So when all this was integrated into D&D lore, I do not know, but sir, we speak your names.

1) The Pool of Radiance- This trilogy kicks off with a bang of a fireball spell! While the follow ups, The Pool of Darkness and The Pool of Twilight are amazing in themselves and as entertaining as the first…They do the first book pure justice, but they are not the first book. Pool of Radiance. I read the book from like, age 10 or 11 until my book fell apart and then ordered another one on Ebay. You are introduced to three protagonists, Shal, Tarl, and Ren’O the Blade. The book is chock full of D&D reference and lore, from monster manual encounters to spells straight out of the player’s handbook. The characters are likeable and cool, the story has about 4 or 5 seperate campaigns that are beautifully painted into a great story arc culminating into a cool ending, and making our heroes nearly super powered into orc, goblin and dragon killing machines. If you can find these tools of the trade, they make for fantastic fantasy brain cocaine, and destroy what you thought you knew about D&D and build you back up from the basics.

Tags: D&D, Lord of the rings, The Hobbit, TSR, Wizards of the Coast